The Giant of the French Revolution: Danton, a Life (Paperback) 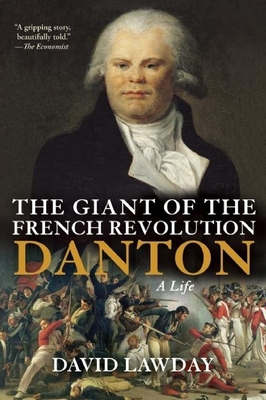 George-Jacques Danton was the driving force behind the French Revolution, which brought an end to an absolute monarchy that had ruled for nearly one thousand years. In The Giant of The French Revolution, David Lawday reveals the larger-than-life figure who joined the fray at the storming of the Bastille in 1789 at twenty-nine--and was dead five years later. Danton's impassioned speeches drove reformers to action and kept the Revolution alive at the moment when it risked collapse. But he lost his grip against Robespierre's Reign of Terror, becoming another of its victims under the guillotine. In vivid, novelistic prose worthy of a Shakespearean tragedy, Lawday leads us from Danton's humble roots to the streets of Paris, where this political legend acted on the operatic stage of the Revolution that altered Western civilization.

Educated at Oxford, David Lawday is a writer and journalist who spent twenty years as a correspondent for The Economist. The author of Napoleon's Master: A Life of Prince Talleyrand, he now lives in Paris with his French wife.

What drove the ugly and dyslexic Danton, suckled by cows in rural Champagne, to rise and fall so dramatically? This is not an easy question. Despite his impact, Danton is enigmatic. . . . David Lawday . . . provides a gripping story, beautifully told. . . . Danton was a headstrong firebrand, a swashbuckling political showman with a prodigious memory, whose spectacular oratory held audiences in thrall.”The Economist

In the great operatic drama of terror and transformation that was the French Revolution George-Jacques Danton dominated the stage. Enormous, fearsome, sentimental, eloquent, insatiable, bombastic - vast in all senses of the word - Danton cuts an irresistible figure: a tragic hero who explores fearlessly, often ruthlessly, the limits of liberty and terror and perishes only when his pity for the guillotine's guiltless victims lays bare his own bull neck.’ The Giant of the French Revolution sweeps one along in a gathering floodtide of rich description, brilliant characterization, subtle political analysis and breathless suspense. David Lawday has written a masterful, spine-tingling thriller - except that every word in this compulsively readable book is true.”Mark Danner, author, Stripping Bare the Body: Politics Violence War

Lawday creates some great set pieces and striking turning pointsHe is able to capture the atmosphere of the early Revolution: its inflammable mix of devilment and righteousness, reckless selflessness and flagrant self-promotion. He sees that Danton was more than the sum of his crimes, the sum of his secrets; he celebrates him, large heart and violent impulses in irresolvable conflict’.” Hilary Mantel, The London Review of Books

Lawdayhas brought Danton into full view in an audacious piece of historical writingthere is not a better portrait of Danton. There are some tremendous setpieces in the bookTee last scene of Danton’s life is rendered exquisitely. Lawday writes: As his Gorgon head touched the block, he reared around to squint up to the exhausted executioner, telling him: Make sure you show it to the people. It is worth a look.”’ Lawday’s triumph is that he makes Danton’s last words not just a defiant last gesture to the world but an irrefutable statement of fact.” Hugh Macdonald, The Herald (U.K.)

Immensely readableLawday’s book is ultimately meticulously researched and thoroughly footnoted throughout. Indeed, alongside its thought-provoking reading of Danton, this biography offers an excellent entrée for the uninitiated into the history and politics of the French Revolution.” Síofra Pierse, Irish Times

Lawday presents an absorbing portrait of a celebrated victimhe viscerally recreates the look and smell of the fevered Paris Danton moved about, setting the mood for the climax to Danton’s call for moderation: his execution in 1794. A page-turner for history readers, guaranteed.”Gilbert Taylor, Booklist

Lawday gives us not only a fine biography but a moving description of revolutionary tragedy as wellAn exciting history, gracefully written and well researched.”Publishers Weekly

The author ably assembles a convincing portrait of a man of giant stature, appetite, ability and egoa clear account of one man’s failure to recognize the fanged creatures that swim in waves of passion and popularity.”Kirkus

World-historical in his ambitions, monumental in his passions, tragic in his final demise, Danton was a figure larger than lifea figure made for the theater. With both empathy and critical understanding, Lawday sets his dramatis persona on the stage of the French Revolution, providing an informed and readable account that deserves a broad audience.” Darrin M. McMahon, Ben Weider Professor of History, Institute on Napoleon and the French Revolution, Florida State University

David Lawday strides confidently into the fray and brings back a compelling, highly readable, and very timely account of a paradoxical champion of humanity pitted against ideological fanaticism.”David Coward, The Independent (U.K.)

World-historical in his ambitions, monumental in his passions, tragic in his final demise, Danton was a figure larger than lifea figure made for the theater. With both empathy and critical understanding, Lawday sets his dramatis persona on the stage of the French Revolution, providing an informed and readable account that deserves a broad audience.” Darrin M. McMahon, Ben Weider Professor of History, Institute on Napoleon and the French Revolution, Florida State University

Dantonhis life is the stuff of opera.”Bee Wilson, The Sunday Times (U.K.)