Plum Bun: A Novel without a Moral (Paperback) 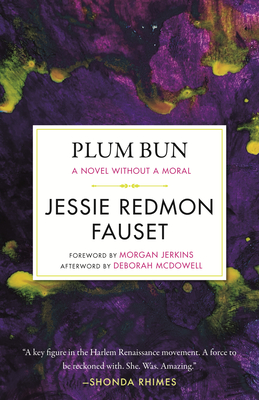 A tour de force of a glimpse into the life of a young Black woman painter who chooses to pass for white, Redmon Fauset is faithful to the novel's subtitle: there is no moralizing to be found in these pages. Simply human truth, human mess, and her characters' attempts to walk the precarious tightrope generated by these conditions. Exquisitetly written, this recovered classic is sure to please any fan of 'Passing' or 'The Vanishing Half'.

For readers of The Vanishing Half, a hidden gem from the Harlem Renaissance about a young Black woman’s journey toward self-acceptance while passing as white in 1920s New York City.

Originally published in 1929 at the height of the Harlem Renaissance, Plum Bun is the story of Angela Murray, a young Black woman of mixed heritage who uses the advantages of her lighter skin to escaper her own life. Beginning with a childhood in her Black middle class Philadelphia neighborhood, Angela dreams of being a renowned painter. She believes she will only achieve this through whiteness and being a part of white society. Bestowed with the light skin of her mother, while her sister Virginia’s darker complexion resembles that of their father’s, Angela refuses to accept a life dictated by the limitations that come with her race and gender.

Leaving behind her family and identity, Angela escapes to a roaring New York City where she befriends the art elites and presents herself as a white woman. Thrust into a world of seduction, betrayal, love, lust, and heartbreak, Angela soon discovers that to find true fulfillment within herself, she must accept and embrace her own identity—both her race and gender. Written with meticulous care and appreciation for the complicated nature of her characters, while also highlighting the beauty of every day Black life, Jessie Redmon Fauset’s Plum Bun raises important questions to inspire new readers.

Jessie Redmon Fauset (1882-1961) was a poet, essayist, novelist, and educator. Though often overlooked, she was a central figure in shaping the Harlem Renaissance. Fauset served as the literary editor of the NAACP’s magazine, The Crisis, from 1919 to 1926 where she published the works of writers such as Langston Hughes, Countee Cullen, W. E. B. Du Bois, and Nella Larsen. Fauset published four novels, including There is Confusion and The Chinaberry Tree.

“A key figure in the Harlem Renaissance movement. A force to be reckoned with. She. Was. Amazing.”
—Shonda Rhimes

“One gets, with thought and study, lights on human character. The book is, therefore, well worth reading: not simply from its point of view, but from its human touch and interesting action and plot.”
—W. E. B. Du Bois

“An engrossing novel of women’s lives and experiences. . . . Jessie Redmon Fauset uses Angela’s development as the springboard to explore larger issues that have become regarded as central to Black women’s fiction: the experience of passing, the exploitation of women as sexual objects and thus a questioning of heterosexual relationships, the assertion of racial pride, and the primacy of female bonding.”
—Mary Katherine Wainwright, Belles Lettres

“A reminder of how entertaining good writing can be.”
—Ernest R. Mercer, East St. Louis Monitor