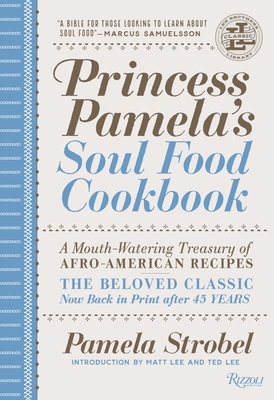 This is truly a treasury—part cookbook and part cultural history, this now back in print cookbook makes soul food accessible in every kitchen. It is gorgeously wrought and makes for a beautiful object in your home and is browsable for hours on end. Plus, the food will definitely keep you warm in winter and delighted in summer! Essential for DMV living. -- Hannah

A new edition gives due to this long-lost classic that helped define soul food.

Princess Pamela ruled a small realm, but her powers ranged far and wide. Her speakeasy-style restaurant in Manhattan was for three decades a hip salon, with regulars from Andy Warhol to Diana Ross. Her iconic Southern dishes influenced chefs nationwide, and her cookbook became a bible for a generation who yearned for the home cooking left behind in the Great Migration. One of the earliest books to coin soul food, this touchstone of African-American cuisine fell out of print more than forty years ago.

Pamela’s recipes have the clarity gained from a lifetime of practice—cardinal versions of Fried Chicken and Collard Greens, but also unusual gems like Pork Spoon Bread and Peanut Butter Biscuits—all peppered with sage advice on living and loving. Her book stands out for its joie de vivre and pathos as well as the skill of its techniques and is now available for cooks everywhere to re-create these soul-satisfying dishes at home.

“If you lived in New York on big dreams and no money, Princess Pamela’s was where you wanted to eat. Quirky and clubby (the Princess didn’t let everybody in), her Little Kitchen served cheap cuts—tripe, chitlins’, pig tails—and made them taste like food for angels. You felt lucky to be there.”
—Ruth Reichl, author of My Kitchen Year

Pamela Strobel was born in Spartanburg, South Carolina, and then came to New York to pursue her love of jazz. In 1965, Strobel opened her restaurant in the East Village, serving the soul food of her childhood while singing for guests alongside a band.

"Based on the food she prepared in her 12-seat soul food restaurant in the 1960s, this book captures some of what is takes for a recipe to have soul. The book languished in obscurity until a recent revamp and re-release from The Lee Bros. that will introduce her words and culinary repertoire to new generations."
—Southern Living, The 100 Best Cookbooks of All Time

“As the culinary world reaches back to our past to understand where it's going, Princess's simple and authentically soulful recipes are more relevant than ever. Her quotes throughout the cookbook are so timeless—it's as if she's whispering pearls of wisdom directly into your ear.”
—Carla Hall, co-host of ABC’s The Chew, chef of Carla Hall’s Southern Kitchen

“Though it's been nearly fifty years since Princess Pamela was first published, this re-issue is right on time! Soul food is experiencing challenging times these days, and the Lee Brothers have picked one of my favorite cookbooks to remind us of the cuisine's glory days. Princess Pamela will please cooks with its timeless, urban, working-class recipes that are wonderfully paired with Pamela Strobel's folklore and humor. This cookbook is mouth watering and rib tickling!”
—Adrian Miller, Author of the James Beard Award–winning book Soul Food: The Surprising Story of an American Cuisine, One Plate at a Time

“If you lived in New York on big dreams and no money, Princess Pamela’s was where you wanted to eat. In a time of ‘Hi my name is,’ servers toting giant pepper shakers, this was a restaurant for the rest of us. Quirky and clubby (the Princess didn’t let everybody in), her Little Kitchen served cheap cuts—tripe, chittlins’, pig tails—and made them taste like food for angels. You felt lucky to be there.”
—Ruth Reichl, author of "My Kitchen Year" and former restaurant critic for "The New York Times"

“Princess Pamela was not only an icon of New York, but one of the most influential restaurateurs to bring soul food to Manhattan from the South during the Great Migration. This cookbook is a bible for those looking to learn about the authentic experience—her poetic voice, southern hospitality, and wealth of knowledge come across so strongly on the page that you feel like you’re sitting in her downtown kitchen talking over over Smothered Chicken or Fried Salt Pork."
—Marcus Samuellson, chef of Red Rooster Harlem and author of  "The Soul of a New Cuisine"

“‘Princess,’ the late Pamela Strobel, rose up from her fertile South Carolina beginnings to become a woman of great passion, dreaming beyond the confines of her southern accent. Armed with awesome homespun recipes, imagination, sass, and the ability to attract and entertain people from all walks of life, she found herself in New York City on the Lower East Side serving up her own culinary revolution. Pamela was an experience—a raging phenomenon who had the ability to have her way with you, and then be done with you so satisfyingly you begged for more.”
—Alexander Smalls, restaurateur and chef, The Cecil and Minton’s

“Princess Pamela’s Soul Food Cookbook embodies what folks are now discovering about black women and food. Her success as an author, entrepreneur, and performer was more than magic. For a southern-born girl, it took grit and kitchen skills to thrive in the Big Apple restaurant scene—Ms. Strobel did that on her own terms. The classic recipes remind us that life is good with a dash of prose. From Headcheese to Peanut Pie, Pamela shows a new generation about soul.”
—Nicole A. Taylor author of "The Up South Cookbook: Chasing Dixie in a Brooklyn Kitchen"

"A reissue of the soul food classic that's been out of print for nearly 40 years. Regulars at the late Strobel’s East Village eatery, Princess Pamela’s Little Kitchen, included Andy Warhol and Diana Ross, who flocked to the restaurant for her fried chicken and collard greens, among other favorites."
—Publishers Weekly

"It has taken nearly half a century for this to be rectified. Next week, Rizzoli is set to release a handsome hardcover reissue of the book. The rehabilitation effort has been spearheaded by Matt and Ted Lee, two siblings better known as the proprietors of the Lee Bros. They first encountered her cookbook in 2004, when they bought it from a used bookstore. The Lees fell in love with the book, considering it a manuscript of integrity and poetry."
—Food 52

"It’s every cookbook collector’s dream: stumbling across a true gem when you least expect it. When Southern food experts and brothers Matt and Ted Lee found a well-worn copy of Princess Pamela’s Soul Food Cookbook: A Mouth-Watering Treasury of Afro-American Recipes in a vintage bookstore, they realized there was something special beyond the book’s plain paperback cover. The out-of-print book deserved a second life (and a better cover), so the Lees decided to republish it. Released on February 7, it will be the first title under their new imprint, the Lee Brothers Library Series."
—SouthernLiving.com

"Forget Le Pavillon. The hardest reservation in the sixties in New York City might have been Little Kitchen, Princess Pamela’s soul food restaurant. The Princess moved around a lot; at one point her restaurant was in a walkup apartment in the East Village, but by the time I nervously rang her bell she’d moved to a narrow storefront on very east Tenth Street. Princess Pamela didn’t let just anybody in: she had to size you up first, and if you passed muster, she might open the door. That did not, however, mean you got to stay. When I visited the Princess in the summer of 1971, I was already a fan.  I’d found a used copy of her cookbook, Princess Pamela’s Soul Food Recipes, and practically memorized it.  I was hoping for something exotic – chitlins maybe – but you pretty much ate what the Princess gave you."
—RuthReichl.com

"Princess Pamela's Soul Food Cookbook: A Mouth-Watering Treasury of Afro-American Recipes by Pamela Strobel is back in print after 45 years thanks to the effortless work of the Lee Brothers. Princess Pamela's speakeasy-style restaurant in New York was the place to be serving regulars that included Andy Warhol to Diana Ross for thirty years. Her Southern cooking influenced chefs nationwide, and her cookbook was one of the earliest books to coin soul food. This iconic book of African-American cuisine has been out of print for forty years and Rizzoli has brought it back for a new generation of cooks. Fried Chicken and Collard Greens and unique treasures such as Pork Spoon Bread and Peanut Butter Biscuits are delivered with advice on living and loving. Food52 shares a fascinating piece on Princess Pamela that is a must read. Pamela's motto was "eat with lovin' kindness' - we all need a little of that."
—EatYourBooks.com

"The Lees parse the book, from its original appearance to its recipes, putting it into historical context. The unattributed preface notes that “one may seek in vain the clear line of demarcation between where Southern cuisine ends and soul food begins,” recognizing the intermingling of technique and culture. But the preface also falls back on cliched images of “bandannaed mammy” and “pickaninny.” The Lees also suppose that the anonymous editor tamped down the spice and flavor of the original recipes, and they encourage contemporary cooks to spice more liberally. These are not fancy recipes or techniques, and the hand of the cook–princess or no–is what will make them sing."
—Books-For-Cooks.com

"Laced with Strobel’s poetry and seasoned with her life story, it is, as the reading line says, a must-have 'Mouth-Watering Treasury of Afro-American Recipes.'"
—Charleston Post & Courier