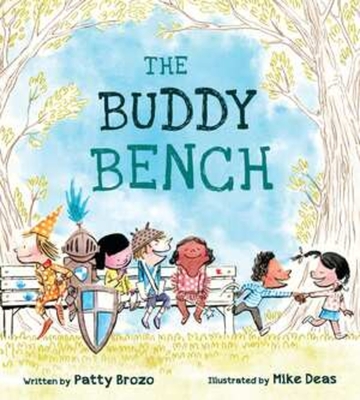 Having seen what being left out is like, children become agents of change, convincing their teacher to let them build a buddy bench.

A school playground can be a solitary place for a kid without playmates; in one survey, 80 percent of 8- to 10-year-old respondents described being lonely at some point during a school day.

Patty Brozo’s cast of kids brings a playground to raucous life, and Mike Deas’s illustrations invest their games with imaginary planes to fly, dragons to tame, and elephants to ride. And these kids match their imaginations with empathy, identifying and swooping up the lonely among them.

Buddy benches are appearing in schoolyards around the country. Introduced from Germany in 2014, the concept is simple: When a child sits on the bench, it’s a signal to other kids to ask him or her to play.

PATTY BROZO (Green Valley, AZ and Traverse City, MI) has been writing stories for and about children since taking creative writing classes in college. She is the author of Miss Pinkeltink’s Purse and The Buddy Bench.

Mike Deas (Salt Spring Island, British Columbia) worked as a concept artist, texture artist, and art lead in the video game industry in England and California before returning to his native Canada. He is the illustrator of The Buddy Bench, Gloria’s Big Problem, and Calvin Gets the Last Word.

A story inspired by a real-life effort to achieve social
inclusion. The generosity on display is heartening. Inviting.
— Kirkus Reviews

Miss Mellon’s class is eager for recess, but on the playground, some children are left out. “Molly said to Brianne, ‘Let’s play follow the leader.’ They walked right by Emma but just didn’t see her,” writes Brozo. But kind individuals do notice their peers watching from the sidelines, and after a number of kids express anxieties (ranging from being new to having holey clothes), the students decide to make a “Buddy Bench,” where classmates can sit to let others know that they want to make friends. Deas illustrates inky figures energetically engaged in playground activities, along with fantasy play characters (a pink dinosaur, a blue elephant). The students’ self-guided innovation is idealistic, but kids who recognize themselves in the playground scenario may well take the sentiment to heart. Back matter offers context about the growth of buddy benches around the world. Ages 5–10. (Aug.)

BROZO, Patty. The Buddy Bench. illus. by Mike Deas. 36p. Tilbury House. Aug. 2019. Tr $17.95. ISBN 9780884486978. PreS-Gr 2–This story shows a variety of children at recess who choose to stay on the sidelines until another child asks them to join the group. Gabe holds back because his leg is in a cast, Emma is self-conscious about her clothes, Sloan is shy, Cooper stutters, Lilly isn’t good at games, Jerome feels small and unaccepted, and Will is new\. Jake invites a child no one notices to play; this causes a ripple effect. This child invites another child on the outside of the group to join in. Lively and colorful cartoon illustrations work well with the text and encourage imagination and also help lighten the mood. After recess, the children approach the Buddy Bench in order to wordlessly express wanting to play when feeling sad, shy, or proud and not knowing how to join in. Two pages at the back of the book describe the history behind the Buddy Bench, suggestions for starting a Buddy Bench, and list resources for more information. VERDICT This is a must-have addition to school and public libraries. It promotes kindness and inclusion in a way that will appeal to children and can be used by teachers to promote emotional intelligence in their classes.–Robin Sofge, Prince William Public Library System, VA

A fantastic story that fosters empathy, understanding, friendship and inclusivity.
— Books For Diversity

This Tilbury House Treasure is my 2019, to be released in August, favorite book of the year so far. The Buddy Bench by Patty Brozo and illus. by Mike Deas is a gem. Written in a beautiful lyrical voice, with perfectly complimenting illustrations, this pairing shares a story of inclusion. There are children left out, who just want to be heard, but are too shy or different or scared to ask. They all come together, their differences aside, to do a citizen project that benefits all. Kid tested and approved, today’s library group of kids asked about making their own buddy benches at their school! A picture book to be read aloud again and again and will be one I purchase for my own personal book collection!