The Rise of Magicks: Chronicles of The One, Book 3 (Paperback) 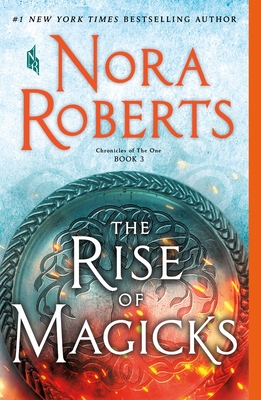 Nora Roberts, the #1 New York Times bestselling author of Year One and Of Blood and Bone concludes her stunning new trilogy praised as “a match for end-of-the-world classics like Stephen King’s The Stand” in The Rise of Magicks.

After the sickness known as the Doom destroyed civilization, magick has become commonplace, and Fallon Swift has spent her young years learning its ways. Fallon cannot live in peace until she frees those who have been preyed upon by the government or the fanatical Purity Warriors, endlessly hunted or locked up in laboratories, brutalized for years on end. She is determined to save even those who have been complicit with this evil out of fear or weakness—if, indeed, they can be saved.

Strengthened by the bond she shares with her fellow warrior, Duncan, Fallon has already succeeded in rescuing countless shifters and elves and ordinary humans. Now she must help them heal—and rediscover the light and faith within themselves. For although from the time of her birth, she has been The One, she is still only one. And as she faces down an old nemesis, sets her sights on the enemy’s stronghold, and pursues her destiny—to finally restore the mystical shield that once protected them all—she will need an army behind her…

NORA ROBERTS is the #1 New York Times bestselling author of more than 230 novels, including Legacy, The Awakening, Hideaway, Under Currents, The Chronicles of The One trilogy, and many more. She is also the author of the bestselling In Death series written under the pen name J.D. Robb. There are more than 500 million copies of her books in print.

“Magnificent . . . perfectly balances magic, adventure, romance, and steely resolve in the battle of good vs. evil while reminding us that while the battles may save us, it's the home, hearth, and community which sustain us. Brilliant and inspiring.” —Kirkus Reviews, Starred Review

"Deftly wielding her own brand of literary magic, Roberts once again merges mesmerizing characters, inventive plotting, and propulsive pacing as she presents the compulsively readable finale to her altogether bewitching Chronicles of The One trilogy." —Booklist

"The final volume of 'The Chronicles of the One' (Of Blood and Bone; Year One) is a full fantasy, postapocalytpic version of Robert's tried and true storytelling mastery. Characters will come full circle, leaving no loose ends in this fast-moving, robust story." —Library Journal