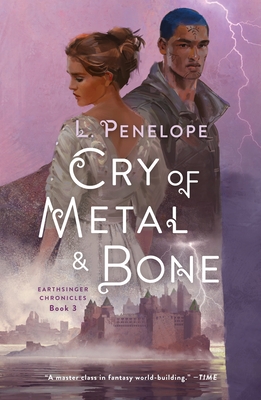 This is book number 3 in the Earthsinger Chronicles series.

The Mantle dividing Elsira and Lagrimar has fallen. As the two kingdoms struggle to unify, one threat stands above them all.

As desperate Lagrimari flee their barren land for a chance at a better life in Elsira, a shadowy group with ties to the Elsiran government launches an attack on their own soil. With threats of more violence, an unlikely crew is assembled to investigate. Among them are Lizvette Nirall, a disgraced socialite seeking redemption for past mistakes, and Tai Summerhawk, a foreign smuggler determined to keep a promise he made to a dead man.

It’s a race against time in this world of deadly magic, secret agendas and court intrigue to discover those responsible before the next assault. And in another land a new enemy awakens—one that will strike terror into the hearts of gods and men.

L. Penelope has been writing since she could hold a pen and loves getting lost in the worlds in her head. She is an award-winning author of new adult, fantasy, and paranormal romance. She lives in Maryland with her husband and their furry dependents: an eighty-pound lap dog and an aspiring feral cat. SONG OF BLOOD AND STONE is her first novel.

"Penelope’s plotting is intricate as ever." - Publishers Weekly on Cry of Metal & Bone

"This is a wonderful integration of high-stakes epic fantasy intrigue with intimate personal connections." - Publisher's Weekly starred review for Whispers of Shadow & Flame

"High stakes and dire twists will keep readers turning pages, and it’s clear that this is only the beginning of what’s sure to be a thoughtful, emotional, magnificent series." - Booklist starred review for Whispers of Shadow & Flame

"A master class in fantasy world-building.” - TIME Magazine on Song of Blood & Stone

"Penelope delivers an engrossing story with delightful characters in this fantastic opening to a promising series." --Publishers Weekly starred review on Song of Blood & Stone

"Wonderful characters, unique setting, and an engaging romance set against the backdrop of ancient magic. I can't wait to see what L. Penelope will do next."--Ilona Andrews, #1 New York Times bestselling author

"Prepare to be hooked. SONG OF BLOOD AND STONE is brimming with captivating lore, unique magic, and plot-turns you never saw coming. L. Penelope has written your next fantasy obsession." --Elise Kova, USA Today bestselling author of The Loom Saga

"Set against a backdrop of myth and magic, Song of Blood and Stone is a sweeping tale of love, duty and destiny that feels as urgent as it does timeless.” - Rebecca Roanhorse, author of TRAIL OF LIGHTNING

“Song of Blood and Stone is an enchanting journey through a world more relevant than ever. Wars between Gods, romance, action—it’s everything I love all at once.” - K Arsenault Rivera, author of THE TIGER’S DAUGHTER

"Song of Blood and Stone is a sweeping journey of magic, romance, sacrifice, and self-discovery. These heartwarming characters, their trials and adventures, and their love for each other will stay with you long after the book ends." - Amanda Bouchet, USA Today bestselling author of The Kingmaker Chronicles

"Song of Blood and Stone is a thrilling and complex journey through a beautifully rendered world that is imaginative, magical, and eerily similar to our own. A terrific read!" - Daniel Jose Older, New York Times bestselling author