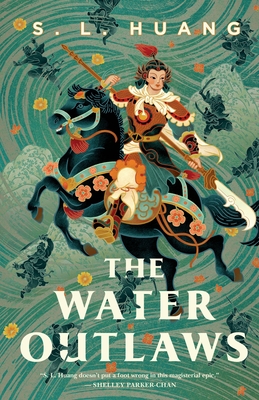 A Most Anticipated Science Fiction and Fantasy of 2023 for Polygon

Inspired by a classic of martial arts literature, S. L. Huang's The Water Outlaws are bandits of devastating ruthlessness, unseemly femininity, dangerous philosophies, and ungovernable gender who are ready to make history—or tear it apart.

In the jianghu, you break the law to make it your own.

Lin Chong is an expert arms instructor, training the Emperor's soldiers in sword and truncheon, battle axe and spear, lance and crossbow. Unlike bolder friends who flirt with challenging the unequal hierarchies and values of Imperial society, she believes in keeping her head down and doing her job.

Until a powerful man with a vendetta rips that carefully-built life away.

Disgraced, tattooed as a criminal, and on the run from an Imperial Marshall who will stop at nothing to see her dead, Lin Chong is recruited by the Bandits of Liangshan. Mountain outlaws on the margins of society, the Liangshan Bandits proclaim a belief in justice—for women, for the downtrodden, for progressive thinkers a corrupt Empire would imprison or destroy. They’re also murderers, thieves, smugglers, and cutthroats.