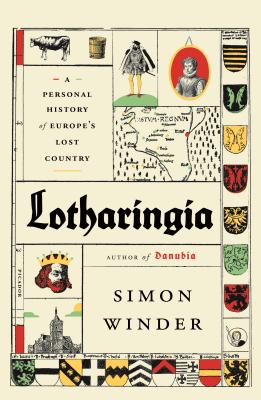 By Simon Winder
Available to order- email info@loyaltybookstores.com
Not In Store - Available to Special Order

In 843 AD, the three surviving grandsons of the great emperor Charlemagne met at Verdun. After years of bitter squabbles over who would inherit the family land, they finally decided to divide the territory and go their separate ways. In a moment of staggering significance, one grandson inherited the area we now know as France, another Germany and the third received the piece in between: Lotharingia.

Lotharingia is a history of in-between Europe. It is the story of a place between places. In this beguiling, hilarious and compelling book, Simon Winder retraces the various powers that have tried to overtake the land that stretches from the mouth of the Rhine to the Alps and the might of the peoples who have lived there for centuries.

Simon Winder is the author of the highly praised The Man Who Saved Britain and a trilogy of books about the history of Central Europe--the Sunday Times (London) Top Ten Bestseller Germania, Danubia, and Lotharingia. He works in publishing and lives in Wandsworth Town, London.

Named a Best Book of 2019 by The Sunday Times

“Nobody knows more than the erudite and entertaining Simon Winder. If you could plug your brain into his, you wouldn’t need Google. Then again, your head might explode.” —Liesl Schillinger, The New York Times Book Review

“Interlacing history and travelogue, this prose journey from Lake Constance up through the Low Countries is an exuberant, exhaustive paean to ‘the richness and density of a region that is both the dozy back end of beyond, and central to the fate of humanity.’” —The New Yorker

"[Lotharingia is] a long cultural tour, led by a brilliantly witty guide who never stops talking, who constantly halts the group in the street to reminisce about his own experiences or digress into a wonderful anecdote, and who gets everyone into extraordinary places normally locked up." —Neal Ascherson, The New York Review of Books

“[Winder] is deeply read and endlessly curious, a man with the enviable ability to make one share his obsessions.” —Michael Gorra, The Wall Street Journal