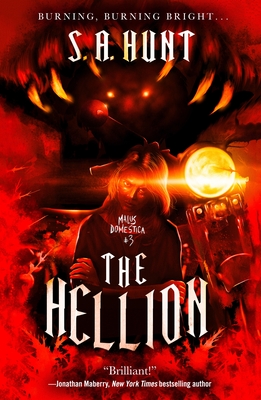 By S. A. Hunt
Available to order- email info@loyaltybookstores.com
Not In Store - Available to Special Order

This is book number 3 in the Malus Domestica series.

For fans of Chilling Adventures of Sabrina and Stranger Things: S. A. Hunt’s The Hellion, third installment of their horror-tinged action-adventure series about a punk YouTuber on a mission to hunt down the supernatural, one vid at a time

Robin Martine has destroyed witches all across the country, but since her confrontation with the demon Andras, Robin has had to deal with her toughest adversary yet: herself. While coming to grips with new abilities, she and her boyfriend Kenway make their way to the deserts of rural Texas, where new opportunities await.

Something lurks in this isolated town of Keystone Hills: a dangerous gang ruled by a husband who wields an iron fist over his wife and daughter. Robin vows to protect these Latina women from harm, but may be underestimating how powerful Santiago Valenzuela is... and how his shapeshifting powers may pose a threat to everyone Robin holds dear.

“Hunt returns to form in the exhilarating third Malus Domestica fantasy (after I Come with Knives), which reignites the series’s fire with intense action sequences and surprising twists and turns. …series fans and new readers alike will enjoy the gripping, high-stakes plot as Robin comes face-to-face with unprecedented enemies and her own demon side. This is sure to entertain.” —Publishers Weekly