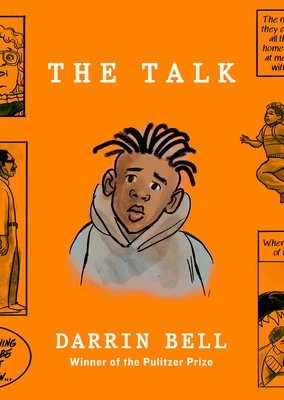 “A moving portrait . . . funny and touching, intellectually and emotionally stimulating. There’s pride and prejudice, family drama, and a love story. I loved this book. You will too.”
—Victor LaValle, author of The Changeling

Darrin Bell was six years old when his mother told him he couldn’t have a realistic water gun. She said she feared for his safety, that police tend to think of little Black boys as older and less innocent than they really are.

Through evocative illustrations and sharp humor, Bell examines how The Talk shaped intimate and public moments from childhood to adulthood. While coming of age in Los Angeles—and finding a voice through cartooning—Bell becomes painfully aware of being regarded as dangerous by white teachers, neighbors, and police officers and thus of his mortality. Drawing attention to the brutal murders of African Americans and showcasing revealing insights and cartoons along the way, he brings us up to the moment of reckoning when people took to the streets protesting the murders of George Floyd and Breonna Taylor. And now Bell must decide whether he and his own six-year-old son are ready to have The Talk.

Darrin Bell, recipient of the 2019 Pulitzer Prize for Editorial Cartooning, the 2016 Berryman Award for Editorial Cartooning, the 2015 RFK Award for Editorial Cartooning, and UC Berkeley’s 2015 Daily Californian Alumni of the Year Award, began his career in 1995 at the age of twenty. While serving as the Daily Californian’s staff cartoonist, he began freelancing for the Opinion pages of the Los Angeles Times, San Francisco Chronicle, and Oakland Tribune. In 1997, he cocreated the comic strip Rudy Park and self-syndicated it to technology magazines. United Media launched it into newspapers in 2001. In 2003, Darrin launched his other comic strip, Candorville, in newspapers via the Washington Post Writers Group (WPWG), which also began syndicating his editorial cartoons in 2013. While WPWG still syndicates Candorville and Rudy Park, Darrin moved his editorial cartoons to King Features Syndicate in late 2018. He’s also a contributing cartoonist for the New Yorker. Darrin lives with his wife and two children in California.

“Propulsive reading, drawn with urgency and verve. Once you pick up The Talk, you won’t be able to put it down.”
—Alison Bechdel, author of Fun Home and The Secret to Superhuman Strength

“It’s nearly impossible to appreciate another person’s truth, but if a brilliant storyteller offers to light the way, take him up on it. Bell is the Ta-Nehisi Coates of comics, an indispensable explainer of how it feels to grow up in a world that repeatedly treats you as other. The talk with my white sons boiled down to 'Be kind.' It’s hard to overstate the distance between that admonition and 'Stay alive.'”
—Garry Trudeau, creator of Doonesbury

“A deeply personal, brutally honest, and achingly funny graphic novel that captures the fear, trauma, and complexity of growing up as a biracial man in the USA. The Talk is a strikingly illustrated vision.”
—Lalo Alcaraz, award-winning visual media artist and creator of the syndicated daily comic strip La Cucaracha