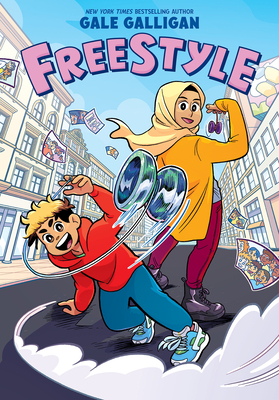 This graphic novel from Gale Galligan, the fantastic mind behind many a Babysitter’s Club adaptation, is finally their own story of a dance, a skill challenge, and the trials of parents just not understanding. As Cory and his friends get ready for the transition between middle school and high school things feel very intense, but preserving the friend group and being open to new adventures is a skill he and the reader learn well.

“Cory is not thrilled to be tutored by Sunna. After he sees her sweet yo-yo skills, they strike a deal: if he makes it through studying, she’ll teach him another trick. Galligan’s new original book is full of style, humor, and friendship!”
— Andrew King, Secret Garden Bookshop, Seattle, WA

From New York Times bestselling author Gale Galligan, a fun, high-energy graphic novel about friendship, family, and the last hurrahs of middle school.Cory's dance crew is getting ready for a major competition. It's the last one before they graduate eighth grade and go their separate ways to high schools all over New York City, so they have to make it count! The group starts to have problems as their crew captain gets increasingly intense about nailing the routine, and things go from bad to worse when Cory's parents ground him for not taking his grades seriously. He gets stuck with a new tutor, Sunna, who he dismisses as a boring nerd… until he catches her secretly practicing cool yo-yo tricks. Cory wants to learn the art of yo-yo, and as his friendship with Sunna grows, he ends up missing practice and bailing on his crew -- and they are not happy about it. With mounting pressure coming from all sides, how is Cory supposed to balance the expectations of his parents, school, dance, and his new friend?

Gale Galligan is the creator of the New York Times bestselling Baby-sitters Club graphic novel adaptations of Dawn and the Impossible Three, Kristy’s Big Day, Boy-Crazy Stacey, and Logan Likes Mary Anne! by Ann M. Martin. They are also the creator of Freestyle, an original graphic novel that they both wrote and illustrated. Gale was featured in The Claudia Kishi Club, a documentary now streaming on Netflix. When they aren’t making comics, Gale enjoys knitting, reading, and spending time with their family and adorable pet rabbits. They live in Pearl River, New York. Visit them online at galesaur.com.

★ "The cartooning instincts on display are superb, always making room for setting, emotion, movement, and color for great visual variety... This inviting, heartfelt story will get readers into the groove of self-expression and lasting friendships." -- Kirkus Reviews, starred review

★ “A visually kinetic, emotionally complex story of finding a sense of self while navigating relationships and expectations. Fun and full of heart.” -- School Library Journal, starred review

"Fans of Galligan's Baby-sitters Club comics will find similar themes of friendship and community in this engaging story, beautifully colored in candy hues by Czap." -- Booklist