My Name Is Not Friday (Paperback) 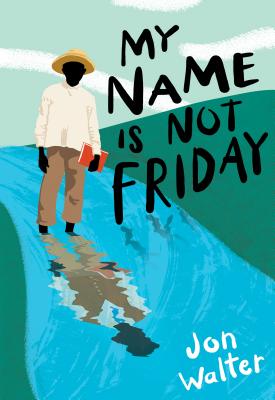 * "Fascinating and unforgettable." --Kirkus Reviews, starred review* "A rich, thought-provoking, and deeply satisfying book." --Publishers Weekly, starred reviewNamed to Bustle's "12 YA Novels That Will Make You See The World Differently"Well-mannered Samuel and his younger brother Joshua, are freeborn black boys living in an orphanage during the end of the Civil War. The boys are two sides of the same coin--one good, one bad, but always inseparable--until Samuel takes the blame for Joshua's latest prank. And the consequence is worse Samuel could ever imagine. He's taken from the orphanage, given a new name -- Friday -- and sold into slavery on a Mississippi cotton plantation. What follows is a heartbreaking but hopeful epic of perseverance in the face of suffering, as Samuel journeys from freedom to captivity and back again.

Jon Walter is a former photojournalist with a special interest in social welfare issues. His debut middle grade novel, Close to the Wind, was chosen as The Sunday Times Children's Book of the Week in the United Kingdom and an Indie Next List pick in the United States. My Name is Not Friday is his young adult debut and has earned five starred reviews. He lives in East Sussex, England, with his family.

Praise for My Name is Not Friday:
* "Samuel's endearing, immersive narration makes the novel a fascinating and unforgettable account of a brutal and shameful chapter in America's history. A heartbreaking story about family, justice, and the resilience of the human spirit." -- Kirkus Reviews, starred review
* "Walter masterfully constructs the world of the plantation and presents a large population of complex and distinctive characters, resulting in a rich, thought-provoking, and deeply satisfying book." -- Publishers Weekly, starred review
* "Walter skillfully tells a thoroughly riveting, elegantly nuanced story of an orphan sold into slavery in the Civil War South . . . . Teen readers will be cheering for Samuel in this insightful, hopeful, gut-wrenching and truly fine novel." --Shelf Awareness, starred review
* "Compelling . . . Lyrically written." --School Library Journal, starred review
* "Remarkable....A multilayered epic that weaves together history and humanity while confronting the elusive grays between right and wrong, this work proves to be a significant, resonating addition to the Civil War canon." --School Library Journal, starred review for the Audio edition
"A multi-faceted view of slavery and its personal, economic, and national impact." --VOYA
"Vivid . . . . The historical details in terms of setting and objects are accurately portrayed. This young adult novel is abundant with interdisciplinary subject areas, such as medicine, science, agriculture, American literature, military history, and geography." --School Library Connection
"This coming-of-age narrative introduces to readers, with great emotion, a character who, though a slave, remains forever freeborn in his mind. Historical notes include a helpful primer on the economics of American slavery." --Booklist
Praise for Close to the Wind:
A Summer 2015 Kids' Indie Next List pick
"Malik's story is simultaneously worldly and gentle, reminding readers that though life is sometimes breathtakingly disappointing and war can certainly bring out the worst in people, bad guys don't always win in the end." -- The Bulletin for the Center for Children's Books
"Walter's debut novel is a profile of innocence maintained in the face of war... The roller-coaster ride of experiences and emotions, taking Malik and readers from fear, despair, loss, and grief to love and hope, is accurately drawn." -- Kirkus Reviews
"Walter does not name the country that Malik is escaping from or the details of the source of the conflict, allowing readers to concentrate on Malik's tender-hearted character and his responses with the attention and respect that he and others like him deserve." -- Shelf Awareness
"Walter turns the heart-rending emotional toll of war on the civilian population into a very personal, poignant story that the reader will remember." -- Voice of Youth Advocates