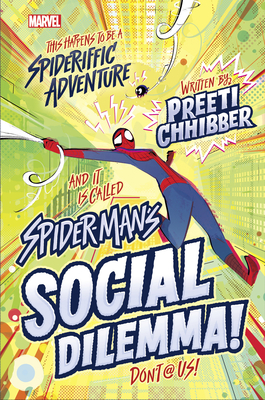 The first in a three-book middle grade novel series by Spider-Man's number one fan and hilarious fiction writer, Preeti Chhibber!

On top of all that, the notorious villain the Sandman is acting more strangely than ever, social media seems to be taking a toll on MJ, and someone keeps trying to steal an artifact that’s supposedly powered by alien matter . . . which can’t be good. Something eerie is going on, and Peter is determined to figure out what it is before things go from weird to dangerous.

Told with Preeti Chhibber’s incomparable voice, which balances wit and charm with teenage earnestness and vulnerability, this series is full of action-adventure, humor, friendship, and, of course, heroism.

Complete the rest of your middle grade collection with these books from Marvel Press:


PREETI CHHIBBER is an author, speaker, and freelancer living in Georgia. Dubbed a “Spider-Man superfan and author” by Publishers Weekly, you can usually find her writing your favorite characters or binge-reading her way through several series at once. She also co-hosts the podcasts Desi Geek Girls and Tar Valon or Bust. She’s appeared on several panels at New York Comic Con, San Diego Comic Con, and onscreen on Syfy. Honestly, you probably recognize her from one of several BuzzFeed “look at these tweets” Twitter lists. Visit her online at PreetiChhibber.com and @runwithskizzers.

“After sixty years of Spider-Man stories, in Spider-Man's Social Dilemma Preeti Chhibber still finds a way to break new ground with the characters we know and love, for a fun and unique tale like you've never seen!”—Jeff Trammell, Head Writer and Executive Producer for Marvel Studios’ Spider-Man: Freshman Year

“For hardcore Spidey fans and those looking for a doorway into the Spider-Verse. I loved this book.”—Alex Segura, bestselling author of Secret Identity and Star Wars: Poe Dameron: Free Fall

“Fun, fast-paced and full of web-slinging action, this is sure to delight Spider-Man fans everywhere. Chhibber's love for the character beams through on every page. A treat.”—G. Willow Wilson, co-creator of the award-winning series Ms. Marvel

“Preeti Chhibber’s take on Peter Parker is one of the most tonally perfect renditions to exist outside the core comics.”—Buzzfeed