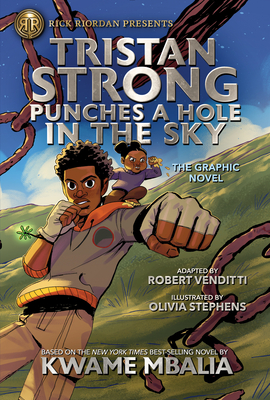 The best-selling and awarding-winning novel about a Black boy who helps folk heroes and gods through storytelling is now a dynamic graphic novel!

"This graphic adaptation of the children's novel that began the 'Tristan Strong' trilogy will have plenty of appeal for readers who are interested in African and African American characters and folklore. The illustrations pop with energy and color."--School Library Journal

Seventh grader Tristan Strong feels anything but strong ever since he failed to save his best friend when they were in a bus accident together. All he has left of Eddie is the journal his friend wrote stories in. Tristan is dreading the month he's going to spend on his grandparents' farm in Alabama, where he's being sent to heal from the tragedy.

But on his first night there, a sticky creature shows up in his bedroom and steals Eddie's notebook. Tristan chases after it--is that a doll?--and a tug-of-war ensues between them underneath a Bottle Tree. In a last attempt to wrestle the journal out of the creature's hands, Tristan punches the tree, accidentally ripping open a chasm into the MidPass, a volatile place with a burning sea, haunted bone ships, and iron monsters that are hunting the inhabitants of this world.

Tristan finds himself in the middle of a battle that has left Black American folk heroes John Henry and Brer Rabbit exhausted. In order to get back home, Tristan and these new allies will need to entice the god Anansi, the Weaver, to come out of hiding and seal the hole in the sky. But bartering with the trickster Anansi always comes at a price.

Can Tristan save this world before he loses more of the things he loves? Find out by diving into this stunning graphic novel adaptation of the original book.


Endorsed by Rick Riordan, author of Percy Jackson and the Olympians, soon to be a series on Disney+.

Complete your graphic novel collection with these fan favorites:

Kwame Mbalia is the New York Times best-selling author of Tristan Strong Punches a Hole in the Sky, for which he received a Coretta Scott King Author Honor award. The book was also named to best-of-the-year lists compiled by Publishers Weekly, the Chicago Public Library, and the New York Times. The second book in the trilogy is Tristan Strong Destroys the World, and Tristan Strong Keeps Punching is the third. Kwame also co-wrote Last Gate of the Emperor with Prince Joel Makonnen and edited the instant New York Times best-seller Black Boy Joy: 17 Stories Celebrating Black Boyhood. Kwame lives with his wife and children near Raleigh, North Carolina, where he is currently working several projects, including a new middle grade series. Follow him on Twitter @KSekouM.

Robert Venditti is a New York Times best-selling author whose characters and concepts have been adapted to film, television, and video games. He has written the monthly comic book series "Green Lantern,” “Superman '78," and "Justice League" for DC Comics, "X-O Manowar" and "Wrath of the Eternal Warrior" for Valiant Entertainment, and the children's novel series Miles Taylor and the Golden Cape. He has also adapted Rick Riordan's Percy Jackson and Heroes of Olympus graphic novels. He lives in Atlanta, Georgia and can be found on Twitter @robertvenditti.

Olivia Stephens is a graphic novelist, illustrator, and writer from the Pacific Northwest. She is the author of Artie and the Wolf Moon, a supernatural graphic novel. Olivia has also created work for a number of sites and publications, including TheNew York Times, The Guardian, and FIYAH Magazine of Black Speculative Fiction. When not drawing, she enjoys eating spicy foods and losing her voice at rock concerts. Visit her website at www.olivia-stephens.com.

"This graphic adaptation of Kwame Mbalia's groundbreaking adventure fantasy hits all the major plot points. . . . Venditti's adaptation is an impressive feat of storytelling efficiency and artist Stephens visualizes . . . many memorable characters . . . The original's popularity will have readers queuing up for their turn with this version, and the graphic-novel space remains in desperate need of more Black representation. Stock up."—Booklist

"This graphic adaptation of the children's novel that began the 'Tristan Strong' trilogy will have plenty of appeal for readers who are interested in African and African American characters and folklore. The illustrations pop with energy and color, and the off-kilter panels will pull readers into the surreal story. The creative reimagining of classic folktale characters will keep readers entertained, and may also inspire them to learn more about the originals. For fans of Rick Riordan-style mythology stories, this features plenty of action and diverse characters."—School Library Journal

*"Mbalia's African American and West African gods (with villains tied to U.S. chattel slavery and the Middle Passage specifically) touch on the tensions between the cultures, a cultural nuance oft overlooked. Readers who want more than just a taste of Alke will be eager for future books. A worthy addition to the diverse array of offerings from Rick Riordan Presents."—Kirkus Reviews (starred review)

*"Overall a stellar mix of the playful and the serious, the traditional and the original, this novel marks the emergence of a strong new voice in myth-based children’s fantasy."—BCCB (starred review)

*"Perfectly paced, this cinematic adventure never drags, anchored by Tristan’s conversational narration and balanced by his struggle to cope with a friend’s passing. It brims with heart, humor, and action, successfully crafting a beautifully unified secondary world that brings the power of stories to glorious life."—Booklist (starred review)

*"Tristan’s voice rings true and sympathetic, while the irrepressible Gum Baby steals every scene. Mbalia expertly weaves a meaningful portrayal of family and community with folklore, myth, and history—including the legacy of the slave trade—creating a fast-paced, heroic series starter."—Publishers Weekly (starred review)