Hindutva and Violence: V. D. Savarkar and the Politics of History (Hardcover) 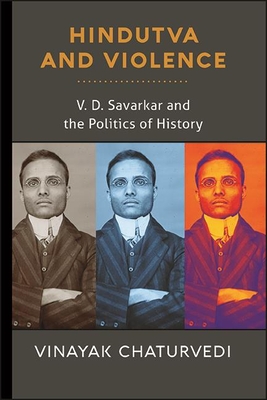 Hindutva and Violence explores the place of history in the political thought of Vinayak Damodar Savarkar (1883-1966), the most controversial Indian political thinker of the twentieth century and a key architect of Hindu nationalism. Examining his central claim that Hindutva is not a word but a history, the book argues that, for Savarkar, this history was not a total history, a complete history, or a narrative history. Rather, its purpose was to trace key historical events to a powerful source--the font of motivation for chief actors of the past who had turned to violence in a permanent war for Hindutva as the founding principle of a Hindu nation. At the center of Savarkar's writings are historical characters who not only participated in ethical warfare against invaders, imperialists, and conquerors in India, but also became Hindus in acts of violence. He argues that the discipline of history provides the only method for interpreting Hindutva.

The book also shows how Savarkar developed his conceptualization of history as a way into the meaning of Hindutva. Savarkar wrote extensively, from analyses of the nineteenth century to studies of antiquity, to draw up his histories of Hindus. He also turned to a wide range of works, from the epic tradition to contemporary social theory and world history, as his way of explicating Hindutva and history. By examining Savarkar's key writings on history, historical methodology, and historiography, Vinayak Chaturvedi provides an interpretation of the philosophical underpinnings of Hindutva. Savarkar's interpretation of Hindutva, he demonstrates, requires above all grappling with his idea of history.

Vinayak Chaturvedi is Professor of History at the University of California, Irvine. He is the author of Peasant Pasts: History and Memory in Western India and the editor of Mapping Subaltern Studies and the Postcolonial and The Pandemic: Perspectives on Asia.