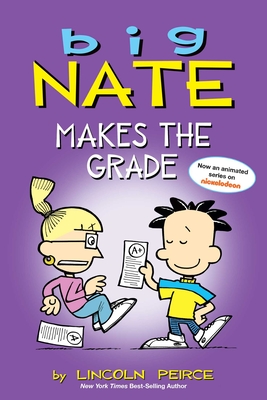 By Lincoln Peirce
Available to order- email info@loyaltybookstores.com
Not In Store - Available to Special Order

This is book number 4 in the Big Nate series.

Now an animated series with Paramount+ and Nickelodeon!

Nate Wright is known to his pals and teachers for many things, his penchant for mischief and his school record for detentions being the foremost. But beating out brainiac Gina's grades is not one of those things! In Big Nate Makes the Grade, the school life goings-on of Nate, his pals, and his long-suffering teachers are recounted in hilarious detail. Now in full-color!

Lincoln Peirce has been drawing the Big Nate comic strip for more than 20 years. Born in Ames, Iowa, Peirce grew up in Durham, New Hampshire. As a kid, he began creating his own strips in the sixth grade. Peirce taught high school in New York City and has created several animated pilots for Cartoon Network and Nickelodeon. He lives in Portland, Maine, with his family.

“In addition to the graphic storytelling, Nate’s cartoons interspersed among Peirce’s panels could provide teachers and librarians with great opportunities to incorporate this series into programs or lessons on cartooning and writing.” (Snow Wildsmith, Booklist)

“…if you’re looking for a new series to introduce your kids to this upcoming holiday season, chances are they’ll really like these collections.” (Rich Johnston, Bleeding Cool)

“Big Nate is super funny. I love these books.” (Appeal-Democrat)