Racism in the Nation's Service: Government Workers and the Color Line in Woodrow Wilson's America (Paperback) 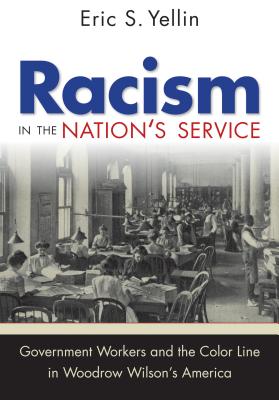 Between the 1880s and 1910s, thousands of African Americans passed civil service exams and became employed in the executive offices of the federal government. However, by 1920, promotions to well-paying federal jobs had nearly vanished for black workers. Eric S. Yellin argues that the Wilson administration's successful 1913 drive to segregate the federal government was a pivotal episode in the age of progressive politics. Yellin investigates how the enactment of this policy, based on Progressives' demands for whiteness in government, imposed a color line on American opportunity and implicated Washington in the economic limitation of African Americans for decades to come.
Using vivid accounts of the struggles and protests of African American government employees, Yellin reveals the racism at the heart of the era's reform politics. He illuminates the nineteenth-century world of black professional labor and social mobility in Washington, D.C., and uncovers the Wilson administration's progressive justifications for unraveling that world. From the hopeful days following emancipation to the white-supremacist "normalcy" of the 1920s, Yellin traces the competing political ideas, politicians, and ordinary government workers who created "federal segregation."