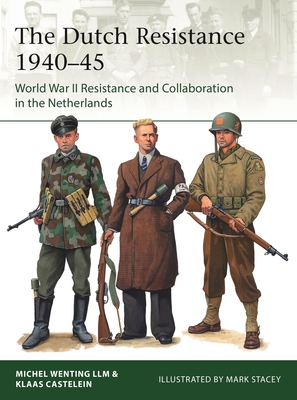 The Nazi occupation of the Netherlands was a complex, varied and bloody affair. Well- documented is the initial capture by the Gestapo of a secret Dutch Special Operations Executive radio-operator who thereafter lured several parachuted agents to their deaths, but, the actual scope and complexity of the occupation was much greater than this. Large-scale civil resistance against the occupation began as early as February 1941, and 1943 saw assassinations, reprisals, and the development of various resistance groups – the LKP National Assault Teams and some 'wild' armed groups: the left wing RzV and the conservative OD. In addition, several overlapping Dutch organizations amalgamated in September 1944 into the NBS: 'Netherlands Interior Forces'. In return, the Germans created the collaborationist Landwacht security force. From the start of September 1944, when Allied armies liberated the southern provinces of North Brabant and Limburg, NBS "shocktroop" units were uniformed and armed by both the British and US armies and assisted their further advance, while a bloody underground struggle continued in the still occupied North until final liberation in April 1945.

The Dutch authors of this title are long-time researchers of the subject, with family connections to Resistance veterans, a large library of hitherto untranslated local sources, and support from several museums and private photo collections to fully document the groups and fighting involved. Using detailed color illustrations of troops and fighters, this volume provides a comprehensive and in-depth account of one of the lesser-known occupations of WWII.

KLAAS CASTELEIN holds a BA degree in History and an MA in Conflict Studies and Human Rights. He researchers into local military history and is a collector of documents and other materials. His family have connections to the wartime Resistance movement in the Netherlands.

MICHEL WENTING LLM is a researcher into local military history and a collector of documents and other materials. He has family connections to the wartime Resistance movement in the Netherlands.

Mark Stacey was born in Manchester, UK, in 1964 and has been a freelance illustrator since 1987. He has a lifelong interest in all periods of history, particularly military history, and has specialized in this area throughout his career. He now lives and works in Cornwall.

“The story of the country's occupation is not a subject widely covered and this book redresses that in a highly informative way that goes beyond what the reader may think they already know.” - John Norris, Gun Mart & Militaria Mart magazine

“I found this taught me a lot that I had not known before, so a good value addition to your references, and with artwork which is likely to attract many modellers with the inspiration/reference of some less familiar uniforms to try.” - Robin Buckland, Military Model Scene

“'An abundance of books has been written about resistance and collaboration in the Netherlands during the Second World War, but not too many of them in English. Klaas Castelein from Duiven and Michel Wenting from Doesburg did write about it in English.'

'We realized that most books about resistance and collaboration had been written in Dutch. As a result, foreigners cannot disclose any information about this, yet its history is incredibly fascinating.'

Wenting and Castelein sketch a balanced view: 'In some parts of the country the Resistance seriously contributed to the liberation, but in other parts they got passionately engaged in exacting vengeance on Germans and collaborators'.” - Piet Venhuizen, De Gelderlander