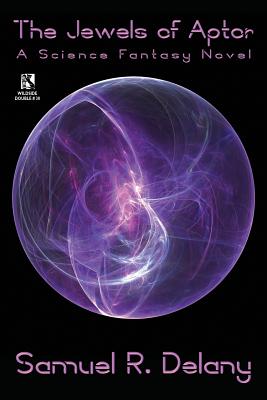 In the tradition of the old Ace Doubles (flip the book over to read the second title), here's the thirtieth Wildside Double: THE JEWELS OF APTOR: A SCIENCE FANTASY NOVEL, by Samuel R. Delany. What was the strange impetus that drove a group of four widely different humans to embark on a fear-filled journey across a forbidden sea to a legendary land? This was Earth still, but the Earth of a future terribly changed after a planet-searing disaster, a planet of weird cults, mutated beasts, and people who were not always entirely human. As for the four who made up that questing party, they included a woman who was either a goddess, a witch, or both; a four-armed boy whose humanity was open to question; and two more men with equally "wild" talents. The story of their voyage, of the power-wielding "jewels" they sought, of the atomic and post-atomic terrors they encountered, is a remarkable science-fiction odyssey of the days to come. CAPTIVES OF THE FLAME: A SCIENCE FANTASY NOVEL, by Samuel R. Delany. The Empire of Toromon had finally declared war. The attacks on its planes had been nothing compared to the final insult--the kidnapping of the Crown Prince. The enemy must be dealt with, and when they were, Toromon would be able to get back on its economic feet. But how would the members of this civilization--one of the few that had survived the Great Fire--get beyond the deadly radiation barrier behind which the enemy lay? And assuming they got attained their goal, how would they deal with that enemy--the Lord of the Flames--whose very presence was unknown to the people among whom he lived? Two great SF adventures in a far-future world.