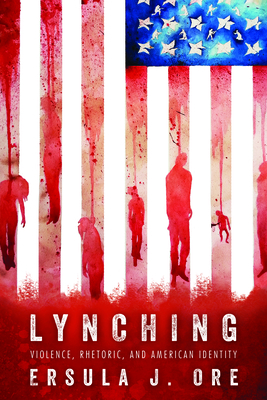 By Ersula J. Ore
Available to order- email info@loyaltybookstores.com
Not In Store - Available to Special Order

Winner of the 2020 Rhetoric Society of America Book Award While victims of antebellum lynchings were typically white men, postbellum lynchings became more frequent and more intense, with the victims more often black. After Reconstruction, lynchings exhibited and embodied links between violent collective action, American civic identity, and the making of the nation. Ersula J. Ore investigates lynching as a racialized practice of civic engagement, in effect an argument against black inclusion within the changing nation. Ore scrutinizes the civic roots of lynching, the relationship between lynching and white constitutionalism, and contemporary manifestations of lynching discourse and logic today. From the 1880s onward, lynchings, she finds, manifested a violent form of symbolic action that called a national public into existence, denoted citizenship, and upheld political community. Grounded in Ida B. Wells's summation of lynching as a social contract among whites to maintain a racial order, at its core, Ore's book speaks to racialized violence as a mode of civic engagement. Since violence enacts an argument about citizenship, Ore construes lynching and its expressions as part and parcel of America's rhetorical tradition and political legacy. Drawing upon newspapers, official records, and memoirs, as well as critical race theory, Ore outlines the connections between what was said and written, the material practices of lynching in the past, and the forms these rhetorics and practices assume now. In doing so, she demonstrates how lynching functioned as a strategy interwoven with the formation of America's national identity and with the nation's need to continually restrict and redefine that identity. In addition, Ore ties black resistance to lynching, the acclaimed exhibit Without Sanctuary, recent police brutality, effigies of Barack Obama, and the killing of Trayvon Martin.

Ersula J. Ore is the Lincoln Professor of Ethics in the School of Social Transformation and assistant professor of African and African American studies and rhetoric at Arizona State University. Her work has appeared in Rhetorics of Whiteness: Postracial Hauntings in Popular Culture, Social Media, and Education as well as Pedagogy: Critical Approaches to Teaching Literature, Language, Composition, and Culture and Present Tense: A Journal of Rhetoric in Society.