The House of War and Witness (Paperback) 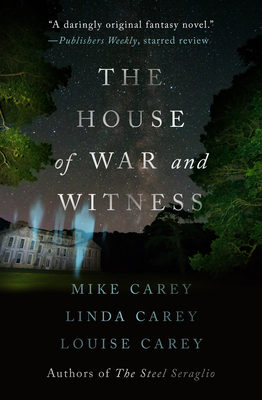 "A fantastical ghost story and a suspenseful military mystery . . . A daringly original fantasy novel" from the acclaimed authors of The Steel Seraglio (Publishers Weekly, starred review). In 1740, an Austrian infantry company more than two hundred strong arrives at the Prussian border. Their orders: to defend the town of Narutsin when war--inevitably--breaks out. But they don't get the warm welcome they're expecting. If anything, the locals seem strangely secretive, and the soldiers who previously garrisoned in the village have disappeared. Fearing the villagers may be consorting with the enemy, the commander orders his prim young lieutenant Klaes to investigate . . . On the outskirts of town, in a dilapidated manor known as Pokoj, the road-weary soldiers make their home for the winter. Accompanying them is Drozde, a camp follower and entertainer who possesses a very special talent: she can see and communicate with the dead. She's the only one who knows that the crumbling mansion is far from empty. It's teeming with ghosts--and they know her. Each spirit tells Drozde how they became a part of Pokoj's sprawling history, hinting at its future as well as its past. As she listens to their tales, it becomes apparent that the story of the manor hasn't yet ended--and that she and Klaes have their own parts to play in the horror that is to come . . . "All of the characters come alive on the pages--even the ghosts. . . . A compelling, accomplished novel." --Strange Horizons "Delightfully odd . . . Subtle horror and extra special creepiness . . . A fine example of what the Careys are capable of." --Starburst