Scammer's Yard: The Crime of Black Repair in Jamaica (Paperback) 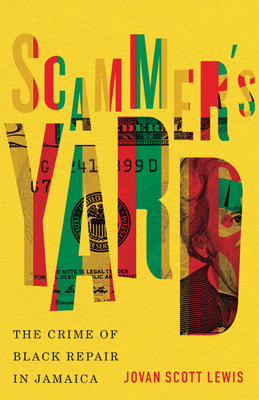 Tells the story of Jamaican “scammers” who use crime to gain autonomy, opportunity, and repair

There is romance in stealing from the rich to give to the poor, but how does that change when those perceived rich are elderly white North Americans and the poor are young Black Jamaicans? In this innovative ethnography, Jovan Scott Lewis tells the story of Omar, Junior, and Dwayne. Young and poor, they strive to make a living in Montego Bay, where call centers and tourism are the two main industries in the struggling economy. Their experience of grinding poverty and drastically limited opportunity leads them to conclude that scamming is the best means of gaining wealth and advancement. Otherwise, they are doomed to live in “sufferation”—an inescapable poverty that breeds misery, frustration, and vexation.

In the Jamaican lottery scam run by these men, targets are told they have qualified for a large loan or award if they pay taxes or transfer fees. When the fees are paid, the award never arrives, netting the scammers tens of thousands of U.S. dollars. Through interviews, historical sources, song lyrics, and court testimonies, Lewis examines how these scammers justify their deceit, discovering an ethical narrative that reformulates ideas of crime and transgression and their relationship to race, justice, and debt.

Scammer’s Yard describes how these young men, seeking to overcome inequality and achieve autonomy, come to view crime as a form of liberation. Their logic raises unsettling questions about a world economy that relegates postcolonial populations to deprivation even while expecting them to follow the rules of capitalism that exacerbate their dispossession. In this groundbreaking account, Lewis asks whether true reparation for the legacy of colonialism is to be found only through radical—even criminal—means.

"Jovan Scott Lewis’s sophisticated and nuanced account of Jamaican lotto scammers’ efforts to escape ‘sufferation’ positions their ethics of seizure within the logic of reparations. If the historical generation of wealth has been criminal—the result of imperialism, slavery, and debt—then its redistribution offers a way to reimagine the postcolonial present and its models of sovereignty. Scammer’s Yard is a must read for those interested in the value of blackness in the wake of the plantation!"—Deborah A. Thomas, University of Pennsylvania

"Scammer’s Yard repositions a network of impoverished, aspirational Jamaicans at the frontier of post-colonial, racial capitalism. Combining sharp-eyed ethnography, rich historical detail, and brilliant analysis, Jovan Scott Lewis takes seriously scammers’ attempts to redress colonial brutality by using scams—in their contradictory glory—as a means of laying claim to reparations. An instant classic, this book is essential reading for anthropologists, political theorists, and scholars of the Black Atlantic or anyone looking for new tools to radically reimagine markets and the forms of radicalized violence and criminality they reproduce."—Noelle Stout, author of Dispossessed: How Predatory Bureaucracy Foreclosed on the American Middle Class

"A page turner . . . the richness of the ethnography is as gratifying as Lewis’ deft blending of the empirical data and conceptual framework."—Antipode

"Timely and necessary."—Ethnic and Racial Studies

" This impressive work deftly weaves together and advances important theoretical constructs, which deepen readers' understanding of this research."—CHOICE

"Scammer’s Yard, by Jovan Scott Lewis, is a rich ethnography of the existential question of Black repair."—Transforming Anthropology

"Potentially transformative for the terrain of Black and Caribbean studies to the extent that it encourages us to strain against easy gestures to unitary futures on which discourses of reparations so readily rely."—Small Axe

"An important ethnography in contesting the pathologizing of the urban poor and the villification of the scammer as a heartless, predatory criminal figure... the author makes a critical intervention to theory and praxes of libration by offering seizure as an ethical postcolonial mode for not only coping with but also challenging political-economic stagnation. "—American Anthropologist