All for One (Definitely Dominguita #3) (Paperback) 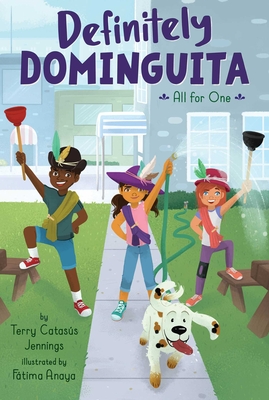 This is book number 3 in the Definitely Dominguita series.

Judy Moody meets the One Day at a Time remake in this third story in a chapter book series featuring a young Cuban American girl who tries to find adventure based on the classics she read with her beloved abuela—can Dominguita save a quinceañera?

Dom, Pancho, Steph, and their noble steed, Rocco, are ready for their next adventure! When their beloved El Señor Fuentes asks Dom to run a very important errand—to put the order in at the local butcher shop for his daughter, Leni’s, upcoming quinceañera—Dom is happy to help. But when Señor Fuentes discovers the order was never put in—and the food for the party has been sold to someone else—Dom takes a cue from The Three Musketeers to try and figure out what happened.

With the help of Pancho and Steph, Dom discovers the dastardly Bublassi brothers have big plans to sabotage Leni’s party. Keeping in mind the famous motto All for One and One for All, Mundytown’s own Three Musketeers are determined to make sure Leni has a party she’ll remember for all the right reasons!