Song of Myself: With a Complete Commentary (Iowa Whitman Series) (Paperback) 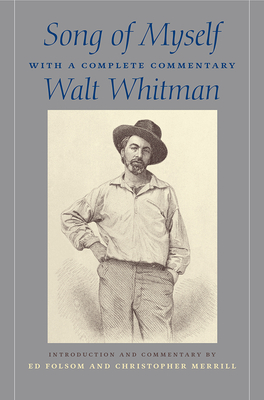 This book offers the most comprehensive and detailed reading to date of Song of Myself. One of the most distinguished critics in Whitman Studies, Ed Folsom, and one of the nation’s most prominent writers and literary figures, Christopher Merrill, carry on a dialog with Whitman, and with each other, section by section, as they invite readers to enter into the conversation about how the poem develops, moves, improvises, and surprises. Instead of picking and choosing particular passages to support a reading of the poem, Folsom and Merrill take Whitman at his word and interact with “every atom” of his work. The book presents Whitman’s final version of the poem, arranged in fifty-two sections; each section is followed by Folsom’s detailed critical examination of the passage, and then Merrill offers a poet’s perspective, suggesting broader contexts for thinking about both the passage in question and the entire poem.

Christopher Merrill has published numerous collections of poetry, edited volumes, books of translations, and nonfiction, including Only the Nails Remain: Scenes from the Balkan Wars, Things of the Hidden God: Journey to the Holy Mountain, and The Tree of the Doves: Ceremony, Expedition, War. He is the director of the International Writing Program at the University of Iowa. He lives in Iowa City, Iowa.

“This is a nearly perfect introduction to Song of Myself, with a great Whitman scholar and a terrific poet who love this breathtaking, funny, heartbreaking visionary poem at the center of American literature, talking to each other and to you as they read it. There couldn’t be a better guide except perhaps Whitman himself.”—Robert Hass, author, Time and Materials, Poems 1997–2005, National Book Award winner

“This book offers the fresh and illuminating interpretations of a critic and a poet, two longtime readers of Whitman’s poetry deeply engaged in respinning all fifty-two sections of Song of Myself from their unique and equally perceptive angles of vision. Highly recommended for use at both the undergraduate and graduate levels.”—Jerome Loving, author, Walt Whitman: The Song of Himself

“When most critics write about literary texts, they focus on their favorite passages and ignore others that happen to not fit their agenda. Folsom and Merrill do something far different by entering into a dialog with Whitman’s Song of Myself, taking on the text of Whitman’s longest and most influential poem in its entirety. Their alternation of lyrical and critical voices makes for an entirely new and exhilarating reading experience that will open many new doors to Whitman’s greatest work for readers around the world.”—Walter Grünzweig, author, Constructing the German Walt Whitman

“An enlivening experiment in contrapuntal criticism. Folsom and Merrill—distinguished critic and poet—each provide section by section commentary on Song of Myself. Bold in form, rich in insight, this is the rare book that will be equally prized by novices and experts. Few books have brought me such pleasure.”—Kenneth M. Price, University of Nebraska-Lincoln

“In this book, Ed Folsom and Christopher Merrill are the first to undertake an attentive and detailed reading of every section of Walt Whitman’s Song of Myself. Their readings offer a gift of wit, wisdom, and delight that will shape conversations about Whitman’s democratic epic for years to come.”—Betsy Erkkilä, Northwestern University