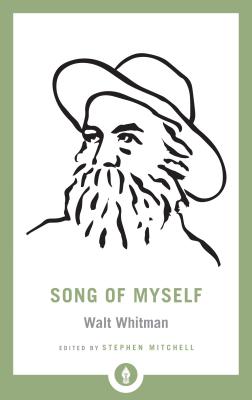 One of the best-known and most stirring American poems, brilliantly edited by Stephen Mitchell, now available in the Shambhala Pocket Library series.

An undeniable and beloved classic of American poetry, “Song of Myself” was originally published as part of Leaves of Grass, with Whitman expanding, revising, and editing it in subsequent editions for much of his life. Here, Stephen Mitchell has gone back to the first edition, only substituting revisions from later editions that express the original vision and clarity of the piece.

Tangling with themes of the self, nature, and one’s place in the universe, Whitman’s labor of language comes again and again to a simple yet astonishing conclusion—“I contain multitudes”—that everything, even the smallest, most seemingly insignificant blade of grass and tiny ant have inside them the infinite universe.

This is Whitman at his most wild and raw, as large and lusty as life, fulfilling his promise to all future generations:

I too am not a bit tamed . . . . I too am untranslatable,
I sound my barbaric yawp over the roofs of the world.

This book is part of the Shambhala Pocket Library series.

The Shambhala Pocket Library is a collection of short, portable teachings from notable figures across religious traditions and classic texts. The covers in this series are rendered by Colorado artist Robert Spellman. The books in this collection distill the wisdom and heart of the work Shambhala Publications has published over 50 years into a compact format that is collectible, reader-friendly, and applicable to everyday life.

WALT WHITMAN (1819-1892) is considered by many to be the greatest of all American poets. His collection of poems, Leaves of Grass, in which "Song of Myself" appears, is probably the most influential volume of American literature. Whitman's work was radically unconventional in both content and technique, with a poetic style that was free and organic in structure.
STEPHEN MITCHELL is a poet, translator, scholar, and anthologist. He is married to Byron Katie, founder of The Work.