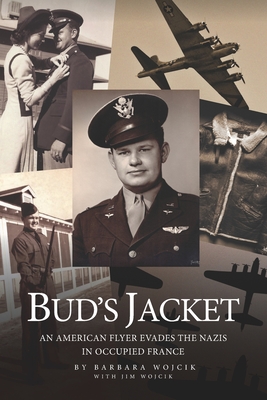 "17 May 1943-Thick smoke and fumes poured into the B-17 nose cone as the bailout bell began to shriek. Choking on the acrid fumes, Bud already knew what to do: OUT OF THE PLANE NOW, BUD He grabbed his chute, snapped it on the harness around his bomber jacket and turned to crouch down by the escape hatch just behind him. He kicked it open, exposing the rushing sea far below; this was Bud's first jump.

Bailing out over coastal France, Lt. James "Bud" Wilschke and his fellow airman S.Sgt. Robert Neil, found themselves on a harrowing, desperate odyssey of escape and evasion through Nazi-occupied Europe. Including extensive research and visits to the original sites, Bud's Jacket is a true tale of adventure, courage and determination. On a broader level, the author pays tribute to the citizen "Helpers" at all levels of French society who risked life and liberty to harbor Allied flyers from what good people then and now reasonably consider the forces of evil."