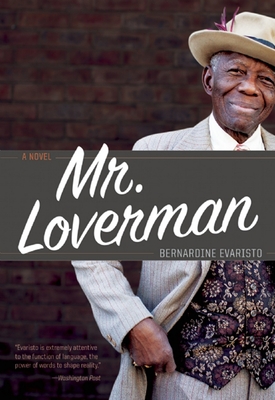 By Bernardine Evaristo
Available to order- email info@loyaltybookstores.com
Not In Store - Available to Special Order

Winner of the Ferro-Grumley Award for LGBT Fiction Evaristo's confident control of the language, her vibrant use of humor, rhythm and poetry, and the realistic mix of Caribbean patois with both street and the Queen's English...fix characters in the reader's mind.
--New York Times Sunday Book Review A Top Ten Favorite of the American Library Association's Gay, Lesbian, Bisexual, and Transgender Round Table's 2015 Over the Rainbow List As a writer at the Guardian once proclaimed, if you don't know Evaristo's work, you should...the novel proves to be revolutionary in its honest portrayal of gay men...and Evaristo's writing is both intelligible and compelling.
--Library Journal (starred review) The writing is poetic, the characters are realistic and all sides are well portrayed.
--Huffington Post Evaristo crafts a colorful look at a unique character confronting social normativity with a well-tuned voice and a resonant humanity.
--Publishers Weekly In this vibrant novel, Evaristo draws wonderful character portraits of complex individuals as well as the West Indian immigrant culture in Britain.
--Booklist Although Evaristo has always been an innovative stylist, her latest novel, the critically acclaimed, award-winning smash, Mr. Loverman, is her chef d'oeuvre; a masterful dissection of the life of a 74-year-old, British-Caribbean gay man.
--Huffington Post, feature on Bernardine Evaristo Included in the Bay Area Reporter's Pride Reading List: Prose & Poetry Included in Baltimore Out Loud's Pride Reading List If the novelist's job is to make sense of the world, Bernardine Evaristo's entire oeuvre attests to her desire to upend preconceived notions of what is and isn't impossible and reflect that mirror right back at her readers. Mr. Loverman is a powerful, morally rigorous and joyful novel and Bernardine Evaristo is a writer at the height of her imaginative powers.
--Huff Post Books Barrington Jedediah Walker lives in London, but he also lives a lie...As his marriage self-destructs, Barrington sees an opportunity to be with the man he loves, but after such protracted misery in this comic, touching book, happiness seems distant and frightening.
--Village Voice Mr. Loverman is a brilliant portrayal of a life that is only lived fully during the twilight years and the struggle within to get there...This is a book for everyone, not to be shelved into a grouping for just one sector of society.
--NEWZ4U.NET Barrington is the kind of character that is naturally likeable; from his love of Shakespeare down to the tips of his boots, he oozes charm and charisma.
--Lit Reactor It takes you and shakes you silly, leaving you stunned...Of the many books I've read so far this year, Mr. Loverman is one of the best.
--1330v Bernardine Evaristo uncovers characters lost to history and myth and with compassion, an original and brilliant voice, and an unparalleled craft--all tinged with humor--she restores them and thus us.
--Chris Abani, author of The Secret History of Las Vegas Evaristo is extremely attentive to the function of language, the power of words to shape reality.
--Ron Charles, Washington Post Book World Barrington Jedidiah Walker is seventy-four and leads a double life. Born and bred in Antigua, he's lived in Hackney, London, for years. A flamboyant, wise-cracking character with a dapper taste in retro suits and a fondness for Shakespeare, Barrington is a husband, father, grandfather--and also secretly gay, lovers with his childhood friend, Morris. His deeply religious and disappointed wife, Carmel, thinks he sleeps with other women. When their marriage goes into meltdown, Barrington wants to divorce Carmel and live with Morris, but after a lifetime of fear and deception, will he manage to break away? With an abundance of laugh-out-loud humor and wit, Mr. Loverman explodes cultural myths and shows the extent of what can happen when people fear the consequences of being true to themselves.

Bernardine Evaristo has been hailed as one of Britain's most exciting and original authors. Her books have been chosen as Books of the Year nine times by British newspapers. In 2004 she was made a fellow of the Royal Society of Literature and in 2006 of the Royal Society of Arts. She has written drama for theater and BBC Radios 4 and 3, collaborated on a multimedia performance with the musicians Joanna McGregor and Andy Shephard for the City of London Festival. Based in London, England, she frequently tours worldwide.