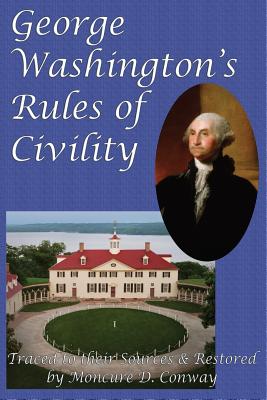 Not In Store - Available to special order for pickup or ship. For even speediest shipping we suggest our Bookshop.org page!
(This book cannot be returned.)

As a schoolboy in Virginia, George Washington took his first steps toward greatness by hand copying a list of 110 "Rules of Civility & Decent Behavior in Company and Conversation." Based on a 16th-century set of precepts compiled for young gentlemen by Jesuit instructors, the Rules of Civility were one of the earliest and most powerful forces to shape America's first president.

Most of the Rules are concerned with details of etiquette, offering pointers on such issues as how to dress, walk, eat in public and address one's superiors. But these maxims are much more than "mere" etiquette; they address moral issues, but indirectly. They seek to form the inner man (or boy) by shaping the outer.

This edition of the Rules, which Moncure D. Conway compiled a century and a half after Washington wrote them, are taken from his original papers. Conway's research results in a collection that includes not only 110 maxims, but their histories and origins as well. His detailed introduction also offers a view into how these Rules made their way into young Washington's life. He also explains the import of this volume, writing "I am no worshipper of Washington. But in the hand of that man of strong brain and powerful passions once lay the destiny of the New World, in a sense, human destiny. But for his possession of the humility and self-discipline underlying his Rules of Civility, the ambitious politicians of the United States might to-day be popularly held to a much lower standard."

More than a century ago, Conway also expressed the desire that "the time is not far distant when in every school right rules of civility will be taught as a main part of the curriculum." We can still hope.