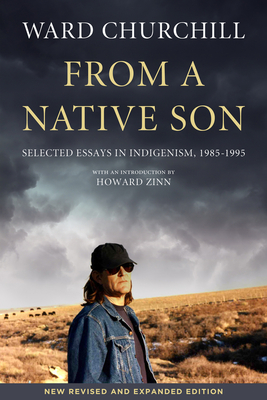 From a Native Son was the first volume of acclaimed American Indian Movement activist-intellectual Ward Churchill’s essays in indigenism, selected from material written from 1985 to1995. Presented here in a new revised edition that includes four additional pieces, three of them previously unpublished, the book illuminates Churchill’s early development of the themes of defending oppressed people’s rights and exposing history’s dark side. Of particular interest is Churchill’s inclusion in the new edition of his 1986 “Statement of Position and Principle” concerning the Indian/Sandinista conflict along the Atlantic Coast of Nicaragua, an item which should go far in dispelling recent confusion about his thinking and actions in that regard.

Ward Churchill (Keetoowah Cherokee) is a former member of the leadership council of Colorado AIM. A past national spokesperson for the Leonard Peltier Defense Committee and UN delegate for the International Indian Treaty Council, he is a life member of Vietnam Veterans Against the War and currently a member of the Council of Elders of the original Rainbow Coalition. He was a professor of American Indian Studies and chair of the department of ethnic studies at the University of Colorado–Boulder. Among his two dozen books are the award-winning Agents of Repression, Acts of Rebellion; The COINTELPRO Papers, Kill the Indian, Save the Man; and Struggle for the Land. He lives in Atlanta, Georgia. Howard Zinn was a much revered dissident intellectual who taught history and political science at Boston University. He is the author of A People’s History of the United States and wrote or edited dozen of books during his lifetime.

“Wielding his intellect like a stiletto, Churchill lays bare the evil that is Western culture.”  —Haunani-Kay Trask, author, From a Native Daughter

“Challenging the fundamental constructions of America through the lens of ‘indigenism,’ Churchill’s astute examination of the U.S. cultural and political spectacle is a winning combination of scholarship and keen perception.”  —Elena Featherstone, editor, Skin Deep: Women Writing on Color, Culture and Identity