Anansi's Gold: The Man Who Swindled the World (Hardcover) 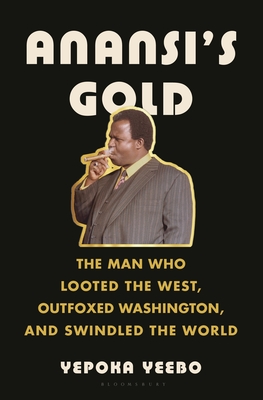 The astounding, never-before-told story of how an audacious Ghanaian con artist pulled off one of the 20th century's longest-running and most spectacular frauds.

When Ghana achieved independence from Britain in 1957, it instantly became a target for home-grown opportunists and rapacious Western interests determined to claim whatever assets colonialism hadn't already stripped. A CIA-funded military junta ousted the new nation's inspiring president, Kwame Nkrumah, then falsely accused him of hiding the country's gold overseas.

Into this big lie stepped one of history's most charismatic scammers, a con man to rival the trickster god Anansi. Born into poverty in Ghana and trained in the United States, John Ackah Blay-Miezah declared himself custodian of an alleged Nkrumah trust fund worth billions. You, too, could claim a piece, if only you would help Blay-Miezah rescue it--with your investment. Over the 1970s and '80s, he and his accomplices-including Ghanaian state officials and Nixon's former attorney general--scammed hundreds of millions of dollars out of thousands of believers. Blay-Miezah lived in luxury, deceiving Philadelphia lawyers, London financiers, and Seoul businessmen alike, all while eluding his FBI pursuers. American prosecutors called his scam “one of the most fascinating--and lucrative--in modern history.”

In Anansi's Gold, Yepoka Yeebo chases Blay-Miezah's ever-wilder trail and discovers, at long last, what really happened to Ghana's missing wealth. She unfolds a riveting account of Cold War entanglements, international finance, and postcolonial betrayal, revealing how what we call “history” writes itself into being, one lie at a time.

Yepoka Yeebo's work has appeared in Bloomberg Businessweek, The Guardian, Quartz, and other publications, and she has been interviewed on PRI's The World and NPR's All Things Considered. A graduate of Columbia University's School of Journalism and the University of London, she divides her time between London, UK, and Accra, Ghana. Anansi's Gold is her first book.