Tears Over Russia: A Search for Family and the Legacy of Ukraine's Pogroms (Hardcover) 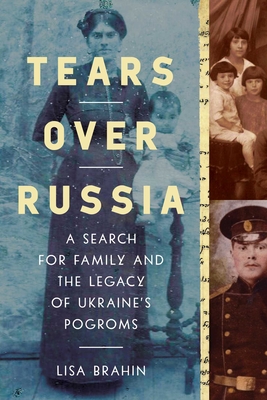 A sweeping saga of a Jewish family and community fighting for survival against the ravages of history.

Set between events depicted in Fiddler on the Roof and Schindler’s List, Lisa Brahin’s Tears over Russia brings to life a piece of Jewish history that has never before been told.

Between 1917 and 1921, twenty years before the Holocaust began, an estimated 100,000 to 250,000 Jews were murdered in anti-Jewish pogroms across Ukraine. Lisa grew up transfixed by her grandmother Channa’s stories about her family being forced to flee their hometown of Stavishche, as armies and bandit groups raided village after village, killing Jewish residents. Channa described a perilous three-year journey through Russia and Romania, led at first by a gallant American who had snuck into Ukraine to save his immediate family and ended up leading an exodus of nearly eighty to safety.

With almost no published sources to validate her grandmother’s tales, Lisa embarked on her incredible journey to tell Channa’s story, forging connections with archivists around the world to find elusive documents to fill in the gaps of what happened in Stavishche. She also tapped into connections closer to home, gathering testimonies from her grandmother’s relatives, childhood friends and neighbors.

The result is a moving historical family narrative that speaks to universal human themes—the resilience and hope of ordinary people surviving the ravages of history and human cruelty. With the growing passage of time, it is unlikely that we will see another family saga emerge so richly detailing this forgotten time period. Tears Over Russia eloquently proves that true life is sometimes more compelling than fiction.

Lisa Brahin is an accomplished Jewish genealogist and researcher. In 2003, she helped rediscover the lost location of the original hand-written manuscript Megilat HaTevah (Scroll of the Slaughter), which she considers one of the most important documents ever recorded on the Russian pogroms. A graduate of George Washington University's Columbian College, she is a two-town project coordinator for Jewishgen.org's international Yizkor Book Project (Holocaust Memorial Book Project).

"This is the kind of book one won’t want to put down, even as it could be written in blood as well as tears."

“A remarkably vivid account of life in the Old Country that reads at times like a novel—or a series of Sholem Aleichem stories.  Aspects of Tears Over Russia have a mythic quality, with larger-than-life characters surmounting impossible circumstances.  Riveting.”
— The Forward

"Overall, Tears Over Russia is illuminating, well researched, and thoroughly sourced. It will be a boon for genealogists of Jewish ancestry and is a good example of how family lore can be placed in a broader historical context."

"While certainly an elegy to Jews dead, first by pogroms and later the Nazis, it is also a celebration of the essential work of librarians, archivists and genealogists. The bibliography alone makes this a valuable resource. This family history of Kyiv is especially potent in this season of Russian-Ukrainian strife, ironically with a Ukrainian Jew now at the helm...A timely and essential reading."
— Library Journal, starred review

“An evocative and distressing account of her grandmother’s experiences during the wave of anti-Jewish pogroms that swept across Russia and Ukraine in the early 20th century. A vital personal record of Ukraine’s turbulent past.”
— Publishers Weekly

"Strug­gle and resilience take cen­ter stage in Lisa Brahin’s Tears Over Rus­sia, a metic­u­lous attempt to recon­struct not only a family’s roots in present-day Ukraine and their tra­vails on their way to Amer­i­ca, but also the intri­ca­cies of the world they left behind....At a time of a record refugee cri­sis in Ukraine and the prospect of fur­ther mass migra­tion, Brahin offers us an oppor­tu­ni­ty to reflect on the pos­si­bil­i­ties and lim­i­ta­tions of the Amer­i­can Dream, and the dreams our fore­fa­thers saw extin­guished in pur­suit of it."

"This meticulously researched book tells the story not only of the author’s family during the anti-Jewish pogroms, from 1917 until their escape to America in 1923, but also the brutalization of Jewish communities throughout Ukraine. [Tears Over Russia] gives the reader insight into the immigrant experience and the terrors that often force them to leave the land they love, losing everything, but gaining freedom."
— Historical Novel Society

"The author has done a service to her grandmother and society by recording the stories of Channa and other Stavishche residents...In Tears Over Russia, Brahin has ensured that the light will stay on."
— New York Journal of Books

"Not only are the stories gripping, and the narrative history easy to read, but the historical timeline is right-on. There are appendices that provide historical detail, and the extensive footnoting provide is evidence of the careful scholarship that Brahin put into this book. May a careful look at this story be an inspiration for us to help those who are – right now – experiencing the same realities, and who – right now – are looking for safe havens somewhere in the world so that they can contribute their creativity, their energy, and their love to the rest of the world."