Deep as the Sky, Red as the Sea (Hardcover) 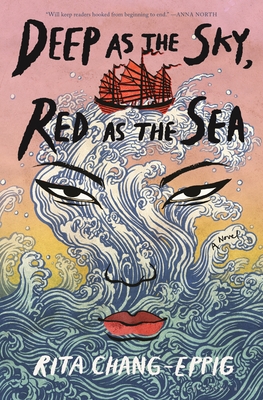 For readers of Outlawed, Piranesi, and The Night Tiger, a riveting, roaring adventure novel about a legendary Chinese pirate queen, her fight to save her fleet from the forces allied against them, and the dangerous price of power.

Named a Most Anticipated Novel by:
Washington Post * Goodreads * LitHub * NetGalley's We Are Bookish * Debutiful * Our Culture * The Chicago Review of Books * The Rumpus * Tor.com

When Shek Yeung sees a Portuguese sailor slay her husband, a feared pirate, she knows she must act swiftly or die. Instead of mourning, Shek Yeung launches a new plan: immediately marrying her husband’s second-in-command, and agreeing to bear him a son and heir, in order to retain power over her half of the fleet.

But as Shek Yeung vies for control over the army she knows she was born to lead, larger threats loom. The Chinese Emperor has charged a brutal, crafty nobleman with ridding the South China Seas of pirates, and the Europeans—tired of losing ships, men, and money to Shek Yeung’s alliance—have new plans for the area. Even worse, Shek Yeung’s cutthroat retributions create problems all their own. As Shek Yeung navigates new motherhood and the crises of leadership, she must decide how long she is willing to fight, and at what price, or risk losing her fleet, her new family, and even her life.

A book of salt and grit, blood and sweat, Deep as the Sky, Red as the Sea is an unmissable portrait of a woman who leads with the courage and ruthlessness of our darkest and most beloved heroes.

“This heart-pounding high-seas adventure is also the moving story of a girl with no options who finds a way to survive, and the costs and consequences of that survival. Shek Yeung - a pirate queen, a mother, a ruthless killer and a loyal friend - is an unforgettable heroine whose journey will keep readers hooked from beginning to end.” —Anna North, New York Times bestselling author of OUTLAWED

“With prose as rich and elegant as it is fierce, Deep as the Sky, Red as the Sea, paints a complex portrait of one of history's most powerful women... A gorgeous vivid adventure.” —Erika Swyler, bestselling author of THE BOOK OF SPECULATION and LIGHT FROM OTHER STARS

“Rita Chang Eppig is such a daring, thrilling writer. DEEP AS THE SKY, RED AS THE SEA sets a whole new bar for words like swashbuckling and adventure, recasting their assumptions while giving us all the big moments: Seafaring battles, swords and family intrigue, tales of love and revenge. It's all here. And in Shek Yeung, Chang-Eppig has given us a heroine for the ages. This is the start of a big career.” —John Freeman, author of How to Read a Novelist

“It is the year of lady pirates and outlaws, friends! You'll get no complaints from me, and with Rita Chang-Eppig's debut, it's definitely *Lizzo Voice* Bad Bitch O'Clock… It's refreshing to see not only a mixed-gender crew but also a woman with a complicated relationship to motherhood, her intended place in the world, and her ambitions. Deep as the Sky, Red as the Sea is a non-stop adventure with danger at every turn, and Shek Yeung is forced to make decisions to ensure her survival. But she remains ruthless throughout, and her adventures will make you want to take up the sword and learn to sail.” —Tor.com

“A pirate queen's adventures in the South China Seas, based on the life of an actual early 19th-century icon--I'm sold a hundred times over on this debut.” —Julia Fine, author of THE UPSTAIRS HOUSE in Chicago Review of Books' 17 Most Anticipated Books of 2023

“Epic yet intimate, Deep as the Sky, Red as the Sea brings to life the pirate queen Shek Yeung. Rita Chang-Eppig charts the journey of a brilliant and brave heroine who fights for the survival of her fleet-and her family's-against a fascinating historical backdrop. A stunning debut.” —Vanessa Hua, bestselling author of FORBIDDEN CITY

“A dazzling feat of storytelling.” —Clare Beams, author of THE ILLNESS LESSON

“Deep as the Sky, Red as the Sea is a riveting and moving story of a real woman and legend. The woman at the center of this struggles with what sensitive and adventurous women have struggled with always: the choice between love and leadership; a life focused on family and friends or a life that looks outward to politics and society. This is richly researched historical fiction with lush mythology and all the excitement and intrigue of action and suspense.” —Tiphanie Yanique, award-winning author of LAND OF LOVE AND DROWNING and MONSTER IN THE MIDDLE

“Deep as the Sky, Red as the Sea is a stunning novel filled with adventure, intrigue, and stirring contemplations of what it means to endure in a world of scarcity and violence. Chang-Eppig combines the scope and lyricism of Gabriel García Márquez with the propulsive storytelling of Susanna Clarke. This is an epic novel with the intimacy of a portrait, a literary adventure not to be missed.” —Seth Fried, author of THE MUNICIPALISTS

“Deep as the Sky, Red as the Sea is a gripping, powerful portrait of a woman on the high seas who is as ferocious as she is human, determined to survive. Brimming with adventure and intrigue, passion and prophecy, fierce battles and moving moments of grace, this novel captures us on a pirate ship and does not let go until long after we've turned the radiant final page.” —Carolina De Robertis, award-winning author of CANTORAS