We Are a Haunting: A Novel (Hardcover) 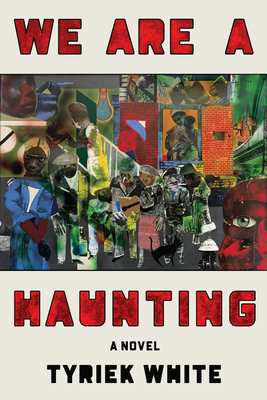 "What a beautiful, haunting and hued narrative of American living. I’m in love with this story and the way Tyriek White breathes life into these characters." —Jacqueline Woodson, MacArthur Fellow and author of Another Brooklyn

"This novel is so New York—so, so New York—yet so deeply southern on lower frequencies. It's astonishing." —Kiese Laymon, MacArthur Fellow and author of Long Division

A poignant debut for readers of Jesmyn Ward and Jamel Brinkley, We Are a Haunting follows three generations of a working class family and their inherited ghosts: a story of hope and transformation.

In 1980’s Brooklyn, Key is enchanted with her world, glowing with her dreams. A charming and tender doula serving the Black women of her East New York neighborhood, she lives, like her mother, among the departed and learns to speak to and for them. Her untimely death leaves behind her mother Audrey, who is on the verge of losing the public housing apartment they once shared. Colly, Key’s grieving son, soon learns that he too has inherited this sacred gift and begins to slip into the liminal space between the living and the dead on his journey to self-realization.

In the present, an expulsion from school forces Colly across town where, feeling increasingly detached and disenchanted with the condition of his community, he begins to realize that he must, ultimately, be accountable to the place he is from. After college, having forged an understanding of friendship, kinship, community, and how to foster love in places where it seems impossible, Colly returns to East New York to work toward addressing structural neglect and the crumbling blocks of New York City public housing he was born to; discovering a collective path forward from the wreckages of the past. A supernatural family saga, a searing social critique, and a lyrical and potent account of displaced lives, We Are a Haunting unravels the threads connecting the past, present, and future, and depicts the palpable, breathing essence of the neglected corridors of a pulsing city with pathos and poise.

Tyriek Rashawn White is a writer, musician, and educator from Brooklyn, where he served at-risk and marginalized youth, artists, and scholars in the classroom. He is currently the media director of Lampblack Lit, a literary foundation which seeks to provide mutual aid and various resources to Black writers across the diaspora. He has received fellowships from Callaloo Writing Workshop and the New York State Writer's Institute, among other honors. He holds a degree in Creative Writing and Africana Studies from Pitzer College, and most recently earned an MFA from the University of Mississippi. He is the author of the forthcoming novel, WE ARE A HAUNTING (Astra House, 2023).

"The multivoiced novel develops each wounded person in terms of their connections to the city. Their stories are linked by rhapsodic longing . . . There are vigorous details from their lives that evoke deep understanding of their problems. And as Colly is tender in recalling Key in the midst of his own experiences; his bereavement is indelible, and it overlays the book’s cityscapes, both rending and buoying him. / A Black family’s history becomes a salve for its wandering son in the potent novel We Are a Haunting."
—Karen Rigby, Foreword Reviews (Starred Review)

"This is the city. This is beauty, this is harshness. With this magnificent debut Tyriek White emerges as a seer and necessary voice. "
—Nana Kwame Adjei-Brenyah, author of Friday Black and Chain-Gang All-Stars

"What a beautiful, haunting and hued narrative of American living. I’m in love with this story and the way Tyriek White breathes life into these characters."
—Jacqueline Woodson, MacArthur Fellow and author of Another Brooklyn

“Tyriek White did not come to play. He is doing something for New York narratives I've never seen, and really never imagined. This novel is so New York—so, so New York—yet so deeply southern on lower frequencies. It's astonishing.”
—Kiese Laymon, MacArthur Fellow and author of the NAACP Image Award winner Long Division

“It is a wonder to me that a novel so incisive about cycles of violence and generational pain can also be so tender, so generously alive to the pleasures of the body and the ampleness of the spirit. And that sentences so redolent of grief can also be fleet and alert as deer, ready to dart in any direction, or to run up against revelation and be transformed. Tyriek White is the rare, real thing: an astonishment.”
—Garth Greenwell, author of Cleanness and What Belongs to You

"We are a Haunting demonstrates the depth and versatility of the family saga as a genre. It’s the story of a mother and son whose lives are in conversation with one another through time and death. It’s also the story of how Black and brown communities in New York have held each other up and persevered in the face of systematic indifference and deliberate attempts at our obliteration. An impressive debut from a powerful new voice."
—Maisy Card, author of These Ghosts Are Family

"This is visionary writing about the lives of visionary people, but they come to us entrenched in the real history of an overwhelmingly real city. Tyriek White’s cultural and political erudition is as extraordinary as his lyricism."
—Jonathan Lethem, author of the National Book Critics Circle Award for Fiction winner, Motherless Brooklyn