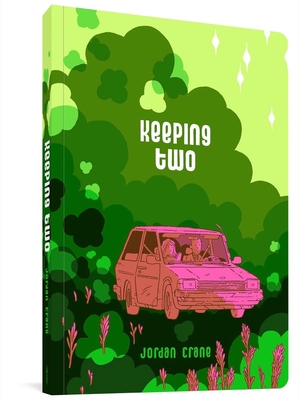 A young couple is stuck in traffic, reading a book aloud to each other to pass the time. The relationship is already strained, but between the encroaching road rage, and a novel that hits way too close to home, tensions are running especially high by the time they arrive back at their apartment. When one of them leaves to get takeout and a movie, each of the young lovers is individually forced to confront loss, grief, fear, and insecurities in unexpected and shocking ways.

Crane's formal use of the comics medium — threading several timelines and the interior and exterior lives of its protagonists together to create an increasing, almost Hitchcockian sense of dread and paranoia — is masterful. But as the title hints, there are dualities at its core that make it one of the most exciting works of graphic literary fiction in recent memory, a brilliant adult drama that showcases a deep empathy and compassion for its characters as well as a visually arresting showcase of Crane's considerable talents. Keeping Two is ostensibly a story about loss, but by the end, it just might also be about finding something along the way — something that had seemed irredeemable up to that point. In that way, it's also a deeply romantic book.

Cartoonist Jordan Crane has been one of the most quietly influential comics-makers of the past quarter-century – in multiple senses of the word: as a cartoonist, a designer, an editor, a publisher, a printmaker, an advocate, an archivist, and more. But Keeping Two is his biggest project in close to two decades and will be one of the most anticipated graphic novels of 2022.

Jordan Crane is a cartoonist living in Los Angeles, CA with his wife and kids. Crane first emerged in 1996 with the iconic comics anthology NON, which he edited, designed, printed, contributed to, and published. His previous book was the all-ages graphic novel The Clouds Above (2008).

The award-winning cartoonist’s inspiring new work, 20 years in the making, is a wild and discursive story with a potent message.
— The Guardian

Crane lets tiny moments swell into a flood of emotion in his most accomplished and moving work yet. ... a gently stunning meditation on loss, absence, and connection.
— Publishers Weekly Starred Review

Crane’s magnum opus is a stylistically adventurous evocation of how fear and grief create barriers to genuine intimacy. Not to be missed.
— Library Journal Starred Review

Deceptive in its complexity and rewarding of multiple readings, Keeping Two is a romantic graphic novel with deep emotional impact.

When his girlfriend is late coming home from running errands, a man is struck by his fear of losing her. He sets out to find her, setting off an elaborate and emotionally charged chain of events in Crane’s beautifully rendered nighttime shadows of suburbia.
— The New York Times

This is a story so rich and complex that it will require a second, and possibly third, reading.
— Booklist