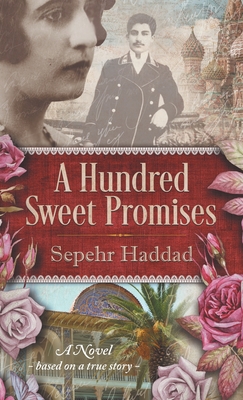 A family secret revealed 40 years ago by a grandmother to her grandson is now an acclaimed Russian historical fiction novel. "A Hundred Sweet Promises" is the tale of the author's grandfather, Nasrosoltan, a famed composer, who on the eve of World War I travels from Persia to Russia to study classical music at the St. Petersburg Conservatory with such masters as Rimsky-Korsakov. While there, Nasrosoltan falls in love with a Romanov princess, but the royalty surrounding him considers this a forbidden love. Unexpectedly, the Tsar gets involved, and Nasrosoltan suddenly finds himself in a battle between head and heart while being carried forward on a wave of destiny toward an uncertain future. A novel based on a true story set against the backdrop of the final days of Imperial Russia.

"...An exceedingly intelligent tale that thoughtfully juxtaposes the maddening effects of romantic love with the violent paroxysms of political insurrection. Furthermore, the reader is given a rare literary treat: a peek into distinct revolutionary periods-Russia and Iran in the early years of the 20th century and Iran in the century's last quarter. A dramatically affecting novel that is also politically astute." - "Kirkus Reviews"

"....one of the peculiar pleasures of this novel is that its author seems deeply familiar with & fond of 19th century Russian literature; there are hints of Chekhov, of Tolstoy's "Kreutzer Sonata" and Pushkin's "The Queen of Spades." The narrative style evokes the writers of that period, and their influence is felt throughout the text. The novel is well-researched and convincingly recreates the pomp and glitter of St. Petersburg in the twilight of the Romanov empire. The story brings back how honor was an achievable ideal and nobility of character and behavior were the qualities sought after in a romantic hero and heroine. Nasrosoltan Minbashian is an appealing and vividly drawn romantic hero in his grandson's retelling of the ill-fated love between the Persian composer and the Russian princess ultimately wound up wed to Rasputin's assassin, Prince Felix Yusupov. Nasrosoltan's complex inner life and character are depicted with a sure hand."-"Publishers Weekly"

Sepehr Haddad's debut novel, "A Hundred Sweet Promises" is the winner of the 2021 American Writers Award in Historical Fiction. The novel also received the 2021 Gold Medal in the Historical Romance Category of HFC. Sepehr is also a Universal Music Group (UMG) recording artist, with the Billboard chart-topping duo "Shahin & Sepehr."