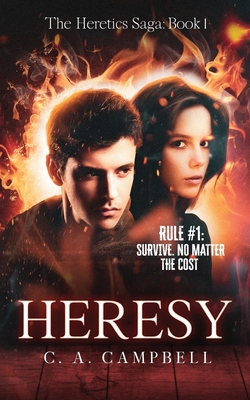 In Arcadia, being different is heresy. Heresy is DEATH.

To survive, citizens must live, dress, and even love according to the United Council's will. Their power is absolute-until a rebel bomb ignites at a national ceremony and unites the lives of three unlikely people.

When the bombing goes wrong, Nicolette Howell, a young heretic, finds herself alone and on the run, bearing secrets that Arcadia would kill for. When she's captured, she must escape, but how can she, when her best chance lies with the son of her sworn enemy?

Driven by the execution of an innocent, Jacob Osgood, a United Councilor's son, hunts for the truth about the heretic movement that Arcadia has hidden. But truth could cost him the one thing he cannot stand to lose: the girl who saved his life at the bombing.

Shiloh Haven, the orphaned daughter of heretics, is forced to become Arcadia's spy in a sinister plot to destroy the heretic army. She faces a terrible choice: survive or risk everything to save the boy she might just love and the rebels who are her only chance of being free.

As their fates entwine, the three must answer an impossible question.

WHAT WOULD YOU DIE FOR?