Islamophobia and the Politics of Empire: Twenty years after 9/11 (Paperback) 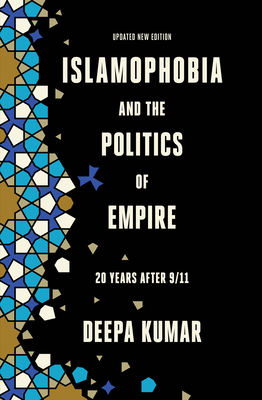 A critically acclaimed analysis of anti-Muslim racism from the sixteenth to the twenty-first centuries, in a fully revised and expanded second edition

This book, now updated to include the end of the Trump’s presidency, offers a clear and succinct explanation of how Islamophobia functions in the United States both as a set of coercive policies and as a body of ideas that take various forms: liberal, conservative, and rightwing. The matrix of anti-Muslim racism charts how various institutions—the media, think tanks, the foreign policy establishment, the university, the national security apparatus, and the legal sphere—produce and circulate this particular form of bigotry. Anti-Muslim racism not only has horrific consequences for people in Muslim-majority countries who become the targets of an endless War on Terror, but for Muslims and those who “look Muslim” in the West as well.

With a new foreword by Nadine Naber.

Deepa Kumar is an award-winning scholar and activist, and Professor of Media Studies at Rutgers University and affiliated faculty with Women and Gender Studies, Sociology, Middle East Studies and Race and Ethnicity Studies. Her writing and scholarship on Islamophobia and empire has been featured in numerous media outlets, including the BBC, the Danish Broadcasting Corporation, the New York Times, NPR, and Al Jazeera.

“Two decades ago, as the imperial politics of Islamophobia went on a rampage first in Afghanistan and then in Iraq, Deepa Kumar mapped out in precise theoretical detail the where, when, what and why of its operations. The first edition of Islamophobia and the Politics of Empire was a pathbreaking contribution to our understanding of the relationship between anti-Muslim racism and empire. This revised and fully updated edition is even more powerful, comprehensive and erudite.”
—Hamid Dabashi, Columbia University, author of Brown Skin, White Masks

“This capacious, ambitious tour de force of history and cultural analysis explores the winding path of ideas about Islam from early modern Europe to the contemporary US. It examines the politics of religion, the construction of race, and the work of empire in intertwining the two … A timely, necessary book, richly interdisciplinary, that contributes to American Studies, International Relations, Race and Ethnic studies, Religion, History, Anthropology, Middle East Studies, Legal Studies, Cultural Studies and related fields.”
—Melani McAlister, George Washington University, author of Epic Encounters

“If you want to know how knowledge can effectively push back against racism, this is the book you need to read now. Ambitious in its historical sweep, incisive in its analysis of the ideological and institutional matrix of Islamophobia that has unfolded in the US over the past two decades, remarkable for its mobilization of eye-opening evidence and the best critical thinking about the racialization and securitization of Muslims, Kumar’s book is not just bold but lucid and accessible.”
—Lila Abu-Lughod, Columbia University, author of Do Muslim Women Need Saving?

“Writing with forceful clarity, Deepa Kumar excavates the deep roots of orientalist colonial discourses and demonstrates how the project of empire has been shared across the political spectrum—from conservatives to liberals … a major contribution both to critical cultural studies as well as a host of related fields.”
—Sut Jhally, University of Massachusetts at Amherst, author of Enlightened Racism

“If you read one book to mark the twentieth anniversary of 9/11, the second edition of Islamophobia and the Politics of Empire must be that book … the most remarkable and comprehensive contribution to date regarding the study of Islamophobia since 2001.”
—Stephen Sheehi, William and Mary, author of Islamophobia: The Ideological Campaign against Muslims

“This expanded and compelling edition of Islamophobia and the Politics of Empire is one of the most important books in the war on terror era. It is comprehensive, informative, and well researched, and written in clear and accessible language. This brilliant author offers an accurate understanding of the ‘matrix of anti-racism,’ which is sorely needed to push back against structural racism … This remarkable book packs a wealth of information and has a sharp and perceptive analysis. Its straightforward style of writing makes it mandatory reading for a global audience.”
—Peter Hervik, Aalborg University, author of The Annoying Difference

“Twenty years after 9/11, Kumar sheds new light on empire, anti-Muslim racism, and the toll of the war on terror, a war that has permeated every aspect of life from securitization to surveillance technologies to our understandings of terrorism … The analysis of how Muslims have been racialized in different ways in the context of empire from the early modern era to the present is a major contribution to critical race studies. This book is comprehensive, illuminating, and inspiring—a tour de force!”
—Jasbir K. Puar, Rutgers University, author of Terrorist Assemblages

“A very impressive book that traces the historical legacy of Islamophobia and anti-Muslim racism to the politics of European and American empires in the so-called Muslim world. Kumar insightfully argues that Muslims had been racialized long before Islamophobia grew in the US … a must-read for anybody interested in understanding the persistence of Islamophobia in the West.”
—Amaney A. Jamal, Princeton University, author of Of Empires and Citizens

“This important and prescient book well deserves a second edition. It has gotten so much more than a postscript or update as Kumar writes in new and extended ways about US militarism and imperial thinking and action around Islam and the Middle East. She shows how they continue to flourish through the putative end of the US war in Afghanistan and the end of the Trump presidency.”
—Catherine Lutz, Brown University, author of Homefront

“Kumar interrogates the relationship between Islamophobia, colonialism, and imperialism in this timely and important new edition. Using a multifocal approach to race and racism, Kumar deconstructs the reduction of Islamophobia to religious intolerance and offers a critical perspective on the multiple intersecting discourses and practices of anti-Muslim racism. A must-read for both academics and non-academics, the book also sheds light on the media-state-empire nexus in the operation of current racial regimes.”
—Minoo Moallem, University of California, Berkeley, author of Between Warrior Brother and Veiled Sister

“Islamophobia is the new anti-Semitism of our time and the Muslim has now replaced the Jew in the racialized imagination of the Euro-American West. Deepa Kumar, an erudite scholar-activist, traces the rise of Islamophobia back to its roots in earliest days of Europe’s colonization and racialization of the world … A superb, necessary book, written with careful research, wisdom, and passion.”
—Aijaz Ahmed, University of California, Irvine, author of In Theory

“Kumar has written a conceptually sophisticated and historically rich book. This second edition is strengthened by her deeper analysis of the matrix of anti-Muslim racism, the political economy of empire, and of imperialist feminism. A must-read for all who want to understand Islam­ophobia and anti-Muslim racism.”
—Fawaz A. Gerges, London School of Economics, author of The Hundred Years’ War for Control of the Middle East

“Kumar’s clear-eyed, methodical mapping of what she names the matrix of anti-Muslim racism spans countries and centuries but remains laser-focused on a set of specific imperial forces that shape the racialization of Muslims. The expanded edition more fully fleshes out the continuities and contra­dictions of Western discourses about Islam and Muslim Others. It also offers an updated, highly readable synthesis of academic debates within a grow­ing number of fields devoted to the critical study of Islamophobia. A must-read!”
—Zareena Grewal, Yale University, author of Islam Is a Foreign Country

“Kumar provides a complex and comprehensive analysis of how the impe­ialist and Orientalist ideologies of Western nations have underpinned actions and attitudes towards Muslims and Muslim-majority countries, in the interests of empire-building, from the colonial to contemporary period. Updated to incorporate the Trump administration, this book is an urgent addition to scholarship seeking to debunk a simplistic ‘clash of civilizations’ narrative and expose the conditions and infrastructure that supports Islamophobic policies such as the ‘war on terror’. Kumar writes with her characteristic force and passion, providing substantial evidence to support her arguments while remaining open to contradictions that make for a nuanced approach. A must for scholars of Islamic studies, social and political science, international relations, and related fields.”
—Elizabeth Poole, Keele University, author of Reporting Islam

“Deepa Kumar’s important book, Islamophobia and the Politics of Empire, is intellectually challenging, rich in detail, and supremely accessible. Moving deftly from narrative to fact, Kumar reveals the whole spectrum of anti-Muslim racism in the context of imperial power politics, especially in America. The second edition is a major revision of the 2012 classic, covering more recent events and substantial new developments in scholarship.”
—Ivan Kalmar, University of Toronto, author of Early Orientalism

“This well-researched book offers an original, comprehensive, and clear analysis of how the race concept has been applied to Muslims. Ambitious in scope, it goes from the early modern era to the war on terror in order to situate anti-Muslim racism within the context of empire … It is an important contribution to critical race studies, a motley field that could engage more with anti-Muslim racism given its ubiquitous presence in the war on terror era. Whether you are a specialist, a novice, or a lay reader, you will come away having learned something valuable.”
—Arun Kundnani, author of The Muslims Are Coming

“A foundational study of the imperial dimensions of the global war on terror that convincingly demonstrates how Islamophobia became a lexicon of modern state racism.”
—Nikhil Pal Singh, New York University, author of Race and America’s Long War

“Ranging across history, cultural analysis, and global politics, Deepa Kumar uncovers the deep roots of anti-Muslim racism. The result is a hugely illuminating reading of race and empire after 9/11. Islamophobia and the Politics of Empire is a vital resource for all anti-racist scholars and activists.”
—David McNally, University of Houston, author of Blood and Money

“Of the ideologies that inspired colonialism and imperialism in history, anti-Muslim racism did the most in recent times in fulfilling a dual function: justifying post–Cold War imperialist wars abroad and scapegoating migrant communities to deflect social anger at home. In this impassioned book, Deepa Kumar thoroughly examines the genealogy of Islamophobia, its Orientalist antecedents, and its present-day functions – for the benefit of students as well as ant-iracist activists.”
—Gilbert Achcar, SOAS, author of Marxism, Orientalism, Cosmopolitanism

“If you find yourself trying to understand not just what twenty years of fighting a ‘war on terror’ has wrought but also why it even exists in the first place, Deepa Kumar’s second edition of Islamophobia and the Politics of Empire is an excellent place to start. This is a bold and ambitious inquiry into the long history and enduring present of anti-Muslim racism in our world.”
—Moustafa Bayoumi, Brooklyn College, CUNY, author of This Muslim American Life

“Deepa Kumar’s newly revised text is a handbook for the twenty-first cent­ury. It demonstrates that to fight and win against racism, we have to fight and win against imperial war and violence. It shows us that the global war on terror weaponized anti-Muslim racism as an everyday and banal act around the world, and that to change this we have nothing less to do than change the world itself.”
—Junaid Rana, University of Illinois at Urbana-Champaign, author of Terrifying Muslims