The Art of Ruth E. Carter: Costuming Black History and the Afrofuture, from Do the Right Thing to Black Panther (Hardcover) 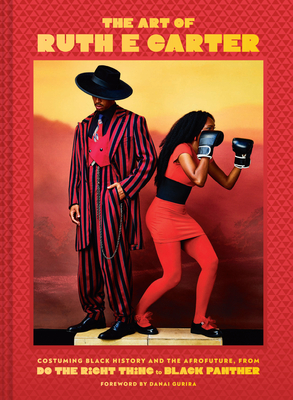 Ruth E. Carter is a living legend of costume design. For three decades, she has shaped the story of the Black experience on screen—from the ’80s streetwear of Do the Right Thing to the royal regalia of Coming 2 America. Her work on Marvel's Black Panther not only brought Afrofuturism to the mainstream, but also made her the first Black winner of an Oscar in costume design. In 2021, she became the second-ever costume designer to receive a star on the Hollywood Walk of Fame.

In this definitive book, Carter shares her origins—recalling a trip to the sporting goods store with Spike Lee to outfit the School Daze cast and a transformative moment stepping inside history on the set of Steven Spielberg's Amistad. She recounts anecdotes from dressing the greats: Eddie Murphy, Samuel L. Jackson, Angela Bassett, Halle Berry, Chadwick Boseman, and many more. She describes the passion for history that inspired her period pieces—from Malcolm X to What's Love Got to Do With It—and her journey into Afrofuturism.

Carter's wisdom and stories are paired with deluxe visuals, including sketches, mood boards, and film stills. Danai Gurira, beloved for her portrayal of Okoye in Black Panther, has contributed a foreword. Fans will even get a glimpse behind the scenes of the sequel Black Panther: Wakanda Forever.

At its core, Carter's oeuvre celebrates Black heroes and sheroes, whether civil rights leaders or Wakandan warriors. She has brought the past to life and helped us imagine a brighter future. This book is sure to inspire the next generation of artists and storytellers.

MAJOR ICON: Ruth E. Carter is behind some of the most iconic costumes on screen, not least the opulent Black Panther looks that won her an Oscar. She's worked with some of the biggest names in cinema, from Spike Lee to Ava DuVernay. Her popularity goes beyond those interested in fashion and film—she is also a role model for women of color and creative entrepreneurs.

INCREDIBLE VISUALS: This gorgeous book includes an amazing array of images. Film stills reveals the details that make Carter's costumes so special. Sketches and mood boards illuminate her artistic process and the way she collaborates with actors, directors, and other fellow crew members. This book is a feast for the eyes.

COMPELLING STORY: Taken as a whole, Carter's three-decade career is not just a collection of great films; it tells a story. Whether comedies or period pieces, biopics or superhero blockbusters, her films have shaped the narrative of the Black experience in American cinema.

BEHIND THE SCENES OF BLACK PANTHER: WAKANDA FOREVER: The book will include a chapter on the sequel to Black Panther, which was the top-grossing superhero film at the time of its release. Fans will love seeing behind the scenes of the original and the new movie, discovering the artistry and passion that went into creating Wakanda.

Ruth E. Carter is one of the most renowned and celebrated costume designers working today. In addition to her win for Black Panther, she's been nominated for two other Oscars and an Emmy. She has costumed more than forty films over the course of three decades. Her work is currently the subject of a traveling exhibit. She lives in Los Angeles.