The Invention of the White Race: The Origin of Racial Oppression (Paperback) 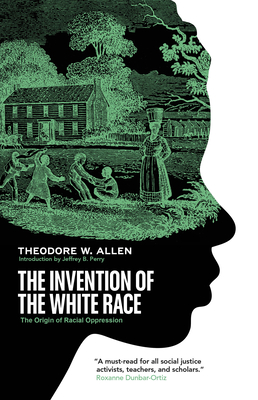 A comprehensive, tour de force analysis of the birth of slavery, racism, and white supremacy in the American South—and how it shaped our modern world.

“A must-read for all social justice activists, teachers, and scholars.”
—Roxanne Dunbar-Ortiz, author of An Indigenous Peoples’ History of the United States

Long heralded as a classic study of the origin of white privilege from the activist who first coined the term, Theodore W. Allen’s work remains an indispensable resource for making sense of our conflicted present, a reference point for everyone from Roxanne Dunbar-Ortiz and Nell Irvin Painter to Reni-Eddo Lodge and Aníbal Quijano.

When the first Africans arrived in Virginia in 1619, there were no “white” people there. Nor, according to colonial records, would there be for another sixty years. In this seminal work, available for the first time here in a single volume, Allen tells how America’s ruling classes created the category of the “white race” as a means of social control. Since that early invention, white privileges have enforced the myth of racial superiority, a fact central to maintaining rulingclass domination over ordinary working people of all colors throughout the history of the Atlantic world.

Spanning centuries and nations, Allen’s analysis takes us from the plantations of Northern Ireland and the mines of Peru to the sugar fields of Brazil and colonies of Chesapeake Bay, Virginia. His account records lives of hardscrabble immigrant survival, Faustian bargains with white supremacy, the tragedy of human bondage, and the stubborn, unbreakable resistance to the global color line.

Theodore W. Allen (1919–2005) was an anti–white supremacist, working-class intellectual and activist who began his pioneering work on white skin privilege and white race privilege in 1965. He co-authored the influential White Blindspot (1967), authored Can White Workers Radicals Be Radicalized? (1969), and wrote the ground-breaking Class Struggle and the Origin of Racial Slavery: The Invention of the White Race (1975) before publication of his seminal two-volume classic The Invention of the White Race (1994, 1997).

“A monumental study of the birth of racism in the American South which makes truly new and convincing points about one of the most critical problems in US history ... a highly original and seminal work.”
—David Roediger

“In a masterful two-volume work, Theodore Allen transforms the reader’s understanding of race and racial oppression from what mainstream history often portrays as an unfortunate sideshow in U.S. history to a central feature in the construction of U.S. (and indeed global) capitalism … more than a look at history; it is a foundation for a path toward social justice.”
—Bill Fletcher Jr., coauthor of Solidarity Divided: The Crisis in Organized Labor and a New Path Toward Social Justice

“A must read for all social justice activists, teachers, and scholars.”
—Roxanne Dunbar-Ortiz, author of Red Dirt: Growing Up Okie

“Decades before people made careers ‘undoing racism,’ Ted Allen was working on this trailblazing study, which has become required reading.”
—Noel Ignatiev, coeditor of Race Traitor, author of How the Irish Became White

“A real tour de force, a welcome return to empiricism in the subfield of race studies, and a timely reintroduction of class into the discourse on American exceptionalism.”
—Times Higher Education Supplement

“As magisterial and comprehensive as the day it was first published, Theodore Allen’s The Invention of the White Race continues to set the intellectual, analytical and rhetorical standard when it comes to understanding the real roots of white supremacy, its intrinsic connection to the class system, and the way in which persons committed to justice and equity might move society to a different reality.”
—Tim Wise, author of White Like Me: Reflections on Race from a Privileged Son

“One of the most important books of U.S. history ever written. It illuminates the origins of the largest single obstacle to progressive change and working-class power in the U.S.: racism and white supremacy.”
—Joe Berry, author of Reclaiming the Ivory Tower

“An intriguing book that will be cited in all future discussions about the origins of racism and slavery in America.”
—Labor Studies Journal

“A must read for educators, scholars and social change activists—now more than ever! Ted Allen’s writings illuminate the centrality of how white supremacy continues to work in maintaining a powerless American working class.”
—Tami Gold, director of RFK in the Land of Apartheid and My Country Occupied in Slave Plantation Societies

“Few books are capable of carrying the profound weight of being deemed to be a classic—this is surely one. Indeed, if one has to read one book to provide a foundation for understanding the contemporary US—read this one.”
—Gerald Horne, author of Negro Comrades of the Crown

“A richly researched and highly suggestive analysis ... Indispensable for readers interested in the disposition of power in Ireland, in the genesis of racial oppression in the U.S., or in the fluidity of ‘race’ and the historic vicissitudes of ‘whiteness.’”
—Choice

“The most important book on the origin of racism in what was to become the United States—and more important now perhaps than when it was first released in the mid nineties.”
—Gregory Meyerson, coeditor of Cultural Logic

“This ‘modern classic’ presents an essential reconstruction of concepts necessary to any understanding of the Western heritage in the context of World history.”
—Wilson J. Moses, author of The Golden Age of Black Nationalism

“Truly original, and worthy of renewed engagement.”
—Bruce Nelson, author of Irish Nationalists and the Making of the Irish Race

“[The Invention of the White Race] will change your life and outlook forever. You simply can’t understand America and who we are without this book”
—Carl Davidson, author of New Paths to Socialism

“If one wants to understand the current, often contradictory, system of racial oppression in the United States—and its historical origins—there is only one place to start: Theodore Allen’s brilliant, illuminating, The Invention of the White Race.”
—Michael Goldfield, author of The Color of Politics: Race and the Mainsprings of American Politics

“Allen has produced a two-volume tour de force that situates the development of racism, white supremacy, and racial identities in context of the sixteenth and seventeenth century British conquest of Ireland, the Atlantic slave trade, the rise of chattel bond-servitude in the Caribbean and English-speaking North America, and the destruction of Native American societies.”
—Charles L. Lumpkins, author of American Pogrom: The East St. Louis Race Riot and Black Politics

“This outstanding, insightful original work with profound implications for the fractured working class protest tradition of the United States could not be more timely as working people throughout the world are shamelessly robbed and dispossessed by the financial manipulations of our Wall Street titans still wielding their poison bait of white skin privilege.”
—Gwendolyn Midlo Hall, author of Social Control in Slave Plantation Societies

“Essential reading for all students of race and power in America. This path-breaking research reframes and cuts across the disciplines of history, sociology and politics, shedding a dynamic new light on the important and often hidden phenomenon of race in America’s cultural evolution.”
—Joseph Wilson, co-author Race and Labor Matters in the New US Economy