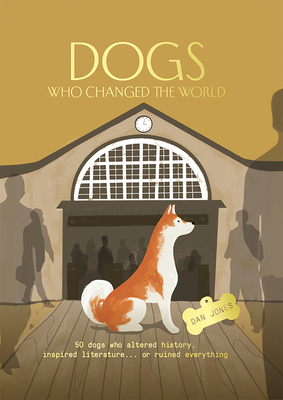 50 awe-inspiring stories of dogs that have altered history, inspired art and literature, reunited lost lovers, saved lives, or just ruined everything. These inspiring, humorous, heart-breaking, or just plain weird stories reveal why dogs have earned their place as our greatest companions, and how our fascination with them is age-old.

Meet big Barry, the hefty St. Bernard credited with saving the lives of more than 40 people lost in the Swiss Alps in the 1800s.

Gangster mongrel Pecas lived his life with a notorious Colombian drug cartel, before flipping the script after he was seized along with copious amounts of cocaine, and re-training as a police dog.

Sigmund Freud's calm-inducing Chow Chow, Jofi who would sit in on all his therapy sessions (and never spilled a secret)

Small in size, huge in stature, little Sargeant Stubby was the mixed bully breed war hero, an integral part of WWI war effort. Saving lives in the trenches, Stubby found soldiers trapped under rubble and even caught a spy.

And Sir Isaac Newton's little terror Diamond, who knocked over a candle, destroying one of the physicist's most important manuscripts.

Dogs That Changed the World celebrates the unique relationship we have with our canine best friends, from contemporary times to all throughout history.

Dogs That Changed the World celebrates the unique relationship we have with our canine best friends, from contemporary times to all throughout history.