Through Many Dangers: Book 1 (Paperback) 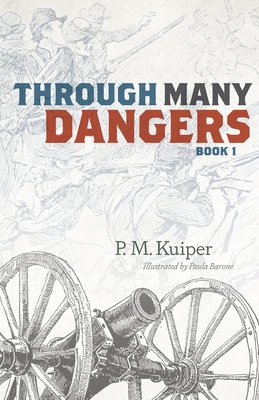 August 1862. Eighteen-year-old Harm van Wyke finds his quiet life in the Dutch Reformed community of Holland, Michigan, upended by the American Civil War. When it becomes clear the war will not be as easily won as once believed, President Lincoln calls for 300,000 volunteers to defend the Union. Harm's minister, Rev. Albertus van Raalte, encourages the young men of his community to join the cause. Harm's father bitterly opposes the idea. Harm hesitates to leave his home, but when his friends portray the war as a grand adventure, he gives in and joins them. Together, some eighty boys and young men from Holland join the 25th Michigan Volunteer Infantry Regiment.

As Harm and his friends travel to army camps in Kalamazoo, Michigan, and then Louisville, Kentucky, they face daily temptations to forget God and turn from their faith. Fellow soldiers think nothing of taking the Lord's name in vain. They gamble, drink, and "forage" from neighboring homes and farms. Harm and his friends gather regularly to sing the old psalms and discuss the Bible, but still, on occasion, they stumble and fall.

As the war progresses, the boys from Holland battle Confederate General John Hunt Morgan in Western Kentucky, and endure an arduous march to Eastern Tennessee where they join the fighting around Knoxville. Later, they take part in General Sherman's prolonged and bloody Atlanta campaign. Along the way, Harm and his friends face the harsh realities of war-exposure, disease, injury, and death. In the midst of such hardship, Harm's faith is tried at every turn. His greatest conflict turns out to be spiritual. Will God give Harm the strength to stand for what is right, even if he finds himself opposed by friends?