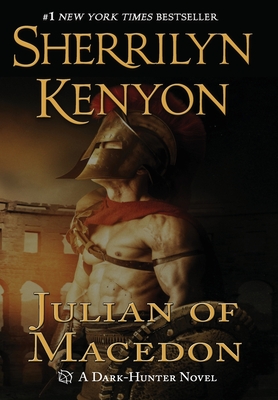 This is book number 1 in the Dark-Hunters series.

Cursed into an eternity of slavery by his own brother, Julian of Macedon has
spent centuries in hell, where the only respite he knows is measured in a
handful of weeks whenever he's summoned through an arcane spell. With the modern
age, those summonings are becoming fewer and fewer, and he lives in fear of the
day when they'll stop for good.

Grace Alexander doesn't believe in much of anything. But when her "psychic"
girlfriend talks her into performing the spell as a joke on her birthday, the
last thing she ever imagines is it working. But work it does. Now, she finds an
ancient Greek general in her living room and trapped in her life for the next
month. Worse, they learn too late that part of the spell means Grace will lose
her sanity should he return to his captivity.

Now it's a race against time to free him. Something much easier said than
done, since it was the ancient gods who cursed him to his fate. And the last
thing they want is to see him go free of the punishment the gods believe he
deserves. It's man against the gods, and a race against time.