Pure Invention: How Japan Made the Modern World (Paperback) 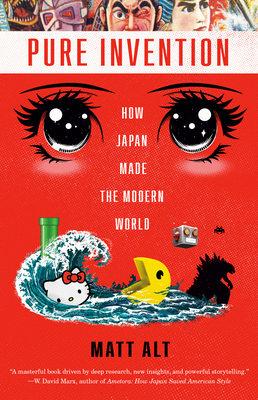 The untold story of how Japan became a cultural superpower through the fantastic inventions that captured—and transformed—the world’s imagination.

Japan is the forge of the world’s fantasies: karaoke and the Walkman, manga and anime, Pac-Man and Pokémon, online imageboards and emojis. But as Japan media veteran Matt Alt proves in this brilliant investigation, these novelties did more than entertain. They paved the way for our perplexing modern lives.

In the 1970s and ’80s, Japan seemed to exist in some near future, gliding on the superior technology of Sony and Toyota. Then a catastrophic 1990 stock-market crash ushered in the “lost decades” of deep recession and social dysfunction. The end of the boom should have plunged Japan into irrelevance, but that’s precisely when its cultural clout soared—when, once again, Japan got to the future a little ahead of the rest of us.

Hello Kitty, the Nintendo Entertainment System, and multimedia empires like Dragon Ball Z were more than marketing hits. Artfully packaged, dangerously cute, and dizzyingly fun, these products gave us new tools for coping with trying times. They also transformed us as we consumed them—connecting as well as isolating us in new ways, opening vistas of imagination and pathways to revolution. Through the stories of an indelible group of artists, geniuses, and oddballs, Pure Invention reveals how Japan’s pop-media complex remade global culture.

Matt Alt is a Tokyo-based writer, translator, and reporter. He is a contributor to The New Yorker online, CNN, Wired, Slate, The Independent, Newsweek Japan, The Japan Times, and many other publications, and is the co-author of six illustrated books about Japan.

“Fascinating . . . Alt’s choice of interviewees and attention to detail marks Pure Invention as one of the best of its kind. If you’re a curious reader looking for an accessible (and recent!) popular history, I highly recommend this book.”—Crunchyroll

“From karaoke to manga, emoji to Pokémon, the creations of modern Japanese style have transformed that country and daily life around the world. Pure Invention is a delightful and highly informed view of the people, ideas, and insights behind this pop-cultural revolution.”—James Fallows, author of China Airborne

“Pure Invention is part careful ethnography, part insightful cultural history of the creative men and women who reimagined Japan in the postwar period. It’s difficult to imagine a more instructive or entertaining account of a fascinating place, people, and period.”—Stephen Snyder, professor of Japanese studies at Middlebury College and translator of Yoko Ogawa’s The Memory Police

“Hello Kitty and Pikachu didn’t just wander into your house by accident. Maybe they snuck in while you were out crooning karaoke with Super Mario? Intriguing and insightful, Pure Invention hands readers a backdoor key to Japan’s culture trend factory, whose offbeat creators remixed and reimagined the world right under our noses.”—Alfred Birnbaum, translator of Haruki Murakami’s Hard-Boiled Wonderland and the End of the World

“As startlingly original as the inventions that it describes . . . Required reading for Japanophiles, this book reads like your most interesting anthropology textbook, weaving together interviews, anecdotes, and primary source material about some of Japan’s most iconic creations. . . . People often ask me why, as an American, I'm so interested in Japanese culture. This book finally provides me with an answer.”—Lauren Orsini, Forbes

“The rise of Japanese popular culture in the twentieth and twenty-first centuries is an incredible story. Alt tells this story with verve and panache, giving a comprehensive overview of Japan’s soft power that is informative, enlightening, and always entertaining.”—Susan Napier, professor of Japanese studies at Tufts University and author of Miyazakiworld

“A masterful exploration of a history, a people and a culture that have shaped our use of technology, our conception of storytelling, and our fascination with Kitties named ‘Hello.’”—The Irish Times

“Deep, engaging . . . A savvy study of Japan’s wide influence in ways both subtle and profound.”—Kirkus Reviews