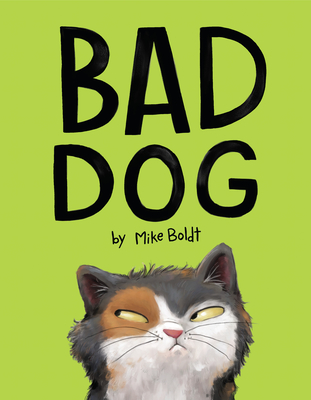 “Rocky is a very bad dog; she doesn’t do tricks or listen to her human’s orders. She’s very good at catlike things, though, like clawing things up and sleeping. Bad Dog has adorable seeping out of every page as Rocky’s human tells readers all about her! Every cat owner will find their own fluffy friends in these accurate illustrations of feline mischief and love.”
— Andrew King, University Book Store, Seattle, WA

The differences between cats and dogs have never been funnier! In this hilarious new story from the illustrator of I Don't Want to Be a Frog, a little girl really, really wants a dog . . . but gets a cat instead!

Cat lovers and dog lovers alike will howl with laughter at this little girl's willful insistence that her cat is a dog. The hilarious ways in which cats and dogs are different are brilliantly illuminated with each turn of the page and will leave young readers and their grown-ups giggling.

★ "Youngsters, especially those with a pet of one kind or another of their own at home, will delight in this case of mistaken identity."—Booklist, starred review

MIKE BOLDT is an author and illustrator living in the countryside of Alberta, Canada. He has illustrated many books for children, including the picture books I Don't Want to Be a Frog, I Don't Want to Be Big, There's Nothing to Do!, and I Don't Want to Go to Sleep. When he's not drawing, he's building snow forts and Lego spaceships with his three kids, or sharing laughs and his ice cream with his wife. He is very glad he's not a frog. Visit Mike online at mikeboldt.ca and on Twitter at @MikeBoldt.

★ "Youngsters, especially those with a pet of one kind or another of their own at home, will delight in this case of mistaken identity."—Booklist, starred review

"Boldt's tale of a bad dog will have young audiences hollering (and giggling). . . . A funny little tale of pet love."—Kirkus

"it’s fun to be a spectator at this battle of wills."—Publishers Weekly

"Children will also love the contrast between the facial expressions of the girl and the cat and will enjoy watching the antics of both. . . . This clever story celebrates the differences between cats and dogs and the owners who love them."—School Library Journal

"Listeners are sure to laugh and 'aww' along as Rocky and her human grow to know and love each other.”—The Bulletin of the Center For Children’s Books