A White Guy Confronting Racism: An Invitation to Reflect and Act (Paperback) 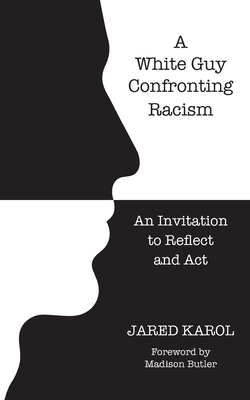 "From the first page to the final vignette of A White Guy Confronting Racism, Jared Karol disrupts the status quo of whiteness by unapologetically recognizing Black humanity." - from the Foreword by Madison Butler

At age twenty, Jared Karol told his best friend his father was gay. Her response? "Big fucking deal " And the journey began. Years of interrogating the shame of having a gay dad led to an interrogation of the mother of all -isms: racism. In A White Guy Confronting Racism, Jared invites us to join him on his evolution of consciousness-sharing stories of shedding, dismantling, and unlearning what he was taught about race and racism growing up. This book is a clear call to action for White people who are newly awakened to racial injustice. But this is not a "how-to" book. Rather than tell us what to do, Jared challenges us to figure out who we want to be-trusting that "what to do" will emerge. Part confessional, part manifesto, A White Guy Confronting Racism declares an unwavering commitment to humanity. Because, as Tarana Burke says, "I don't believe your antiracist work is complete or valid or useful if you haven't engaged with Black humanity." So, are you engaging with Black humanity?

Jared Karol is the founder of JaredKarol.com, a consulting firm specializing in guiding White people to confront racism and be unapologetic antiracists. As a trusted advisor, he guides executives, people managers, and dedicated change agents at Fortune 500 companies, start-ups, and non-profits. A sought-after professional speaker, panel moderator, leadership coach, and facilitator of difficult conversations, Jared's storytelling approach inspires and influences individuals and groups worldwide. An avid reader, accomplished musician, and active meditator, he lives with his family in the San Francisco Bay Area. Learn how you can bring Jared to your organization at JaredKarol.com.