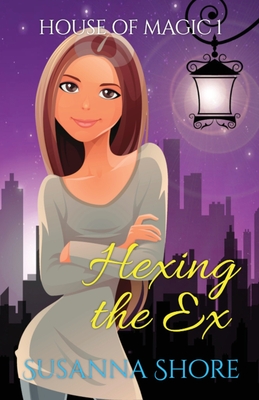 I didn't expect to be evicted the first thing I returned from my holiday, but thanks to my flatmate Nick, that's what I was facing.

It's not exactly easy to find a new place to live in London, so when Phoebe Thorpe spots a room-to-let sign at the window of a magic shop, she doesn't hesitate. The room is perfect, even if chores are part of the rent. There is only one thing odd about her new landladies. They seem to believe magic exists.

Phoebe doesn't believe in magic, but unfortunately magic believes in her. A mysterious statuette is sent to her boss, Archibald Kane, and she accidentally triggers a curse meant for him. Naturally, the first person she curses is her ex-boyfriend. But why would anyone want to curse her boss, a perfectly ordinary antiques dealer? Or is he?

Phoebe sets out to break the curse with the help of her new housemates. But it isn't easy trying to solve a mystery she doesn't even believe is real. Then again, that hellhound chasing her seemed pretty solid... Maybe there's more to magic than hexing one's ex.

This is the first book in House of Magic, a new series by Susanna Shore blending mystery and magic, with a resourceful heroine and plenty of action.