The Condottieri: The History of Italy's Elite Mercenaries during the Middle Ages and Renaissance (Paperback) 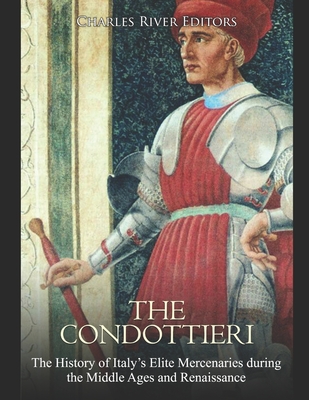 *Includes pictures
*Includes excerpts of contemporary accounts
*Includes a bibliography for further reading
In 1494, there were five sovereign regional powers in Italy: Milan, Venice, Florence, the Papal States and Naples. In 1536, only one remained: Venice. These decades of conflict precipitated great anxiety among Western thinkers, and Italians responded to the fragmentation, forevermore, of Latin Christendom, the end of self-governance for Italians, and the beginning of the early modern era in a myriad of ways. They were always heavily influenced by the lived experience of warfare between large Christian armies on the peninsula.
The diplomatic and military history of this 30 year period was a complex one that one eminent Renaissance historian, Lauro Martines, described as "best told by a computer, so many and tangled are the treatises, negotiations and battles." The fighting went in tandem with the Renaissance and was influenced by it, and the Venetian involvement in the Holy League and the successful restoration of the Aragonese dynasty in Naples served as catalysts for the development of a political and ideological orientation that was shared by the ruling classes across the Italian peninsula. The catch phrases for this movement were buoni italiani and libert d'Italia. These terms described the proponents of a strategic line that attempted to revive the political systems in force in Italy at a perceived time of "political balance" between the Peace of Lodi in 1454 and the French invasion of 1494. As a political program, the libert d'Italia demanded the expulsion of the transalpine foreigners from Italy and the reconstruction of a multi-state structure that was balanced and ruled by natives. That would not truly occur until the 19th century, and Italy would serve as a theater of war for the Hapsburg and Valois monarchies until the mid-16th century, until the Peace of Cateau-Cambr sis in 1559.
Since several large city-states such as Milan and Venice growing rich on the prosperous Mediterranean trade routes, they had the money to commission grandiose cathedrals and works of art that still astound people today, but they also had the resources to hire armies and constantly fight to expand their power. Ironically, their very success was an impediment, as most prosperous city-states had far more money than available manpower because so many people worked in essential jobs in agriculture, crafts, or public works. Large bodies of men could not be spared for fighting, so if a city-state wanted to expand, it needed to hire an army to bolster the ranks.
Other factors limited the use of homegrown armies. City militias often got embroiled in the factional disputes that were rife in Italian urban politics, to the extent that the militia might take one side or another, or be so divided as to be ineffective against external enemies. The only way to avoid this was to bring in neutral, outside administrators all factions could agree on to handle local affairs in a supposedly impartial manner. Known as the podest system, this odd method of running a government began to be common by the late 13th century, but this administration would need troops of its own and naturally hired outsiders, often non-Italians, to keep the peace.
Thus was born the condottieri (singular condottiero or condottiere). Meaning "contractor," it referred not only to the captains of mercenary bands but was also used as a general term for all the mercenaries in Italy during the Late Middle Ages and Renaissance. These flamboyant figures, sometimes of noble birth, had at their command experienced armies who hired themselves out to the highest bidder and kept to a strict code of professional ethics. Their fighting prowess and prestige soon put them in high demand, and rulers all across Italy eagerly bid for their services. Even the Vatican hired them as the Papal States sought to expand their influence.