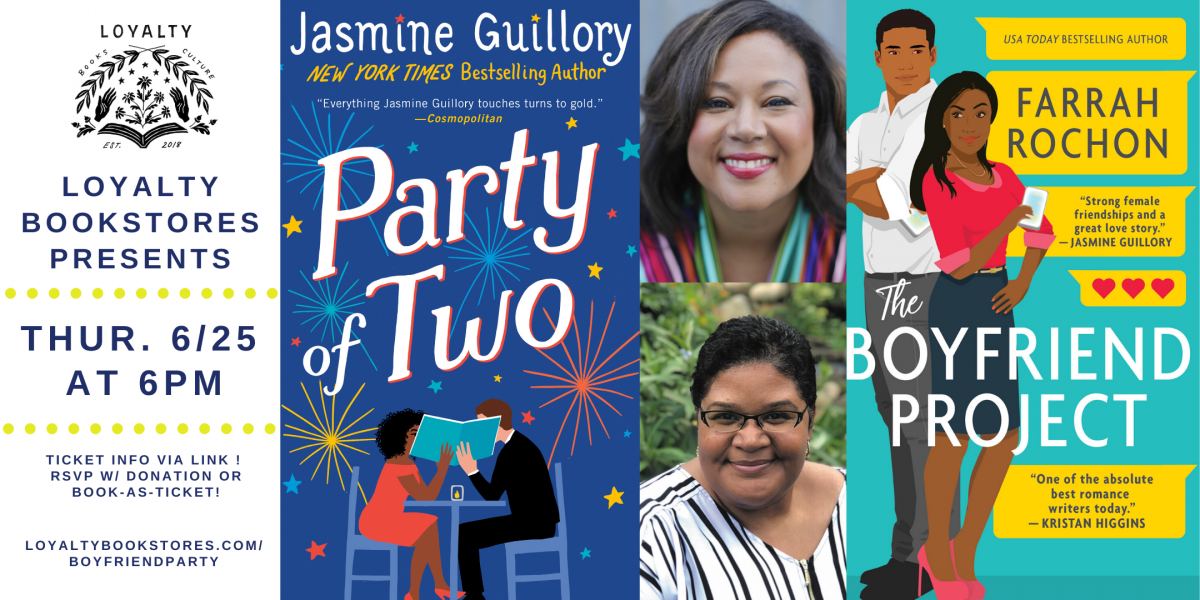 Join us for an intimate chat with two absolute faves! Jasmine Guillory and Farrah Rochon will discuss their two new books and the radical Black joy of love right now. You can RSVP and get the ticket link below! Tickets will be available for any donation of your choosing OR as book-as-ticket!

PARTY OF TWO: A chance meeting with a handsome stranger turns into a whirlwind affair that gets everyone talking. Dating is the last thing on Olivia Monroe's mind when she moves to LA to start her own law firm. But when she meets a gorgeous man at a hotel bar and they spend the entire night flirting, she discovers too late that he is none other than hotshot junior senator Max Powell. Olivia has zero interest in dating a politician, but when a cake arrives at her office with the cutest message, she can't resist-it is chocolate cake, after all. Olivia is surprised to find that Max is sweet, funny, and noble-not just some privileged white politician she assumed him to be. Because of Max's high-profile job, they start seeing each other secretly, which leads to clandestine dates and silly disguises. But when they finally go public, the intense media scrutiny means people are now digging up her rocky past and criticizing her job, even her suitability as a trophy girlfriend. Olivia knows what she has with Max is something special, but is it strong enough to survive the heat of the spotlight?

BOYFRIEND PROJECT: Samiah Brooks never thought she would be "that" girl. But a live tweet of a horrific date just revealed the painful truth: she's been catfished by a three-timing jerk of a boyfriend. Suddenly Samiah-along with his two other "girlfriends," London and Taylor-have gone viral online. Now the three new besties are making a pact to spend the next six months investing in themselves. No men and no dating. For once Samiah is putting herself first, and that includes finally developing the app she's always dreamed of creating. Which is the exact moment she meets the deliciously sexy Daniel Collins at work. What are the chances? But is Daniel really boyfriend material or is he maybe just a little too good to be true?

Jasmine Guillory is the New York Times bestselling author of five romance novels, including The Wedding Date and The Proposal. Her work has appeared in O, The Oprah Magazine, Real Simple, and Cosmopolitan. She lives in Oakland, California.

Bestselling author Farrah Rochon hails form a small town just west of New Orleans. She spends most of her time reading, cooking, traveling the world, visiting Walt Disney World, and catching her favorite Broadway shows. Her newest book, The Boyfriend Project, is available now. For more on Farrah and her books, visit FarrahRochon.com