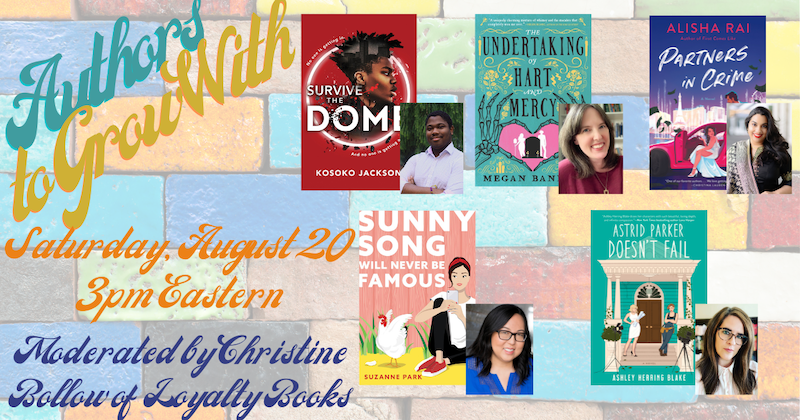 Loyalty is delighted to participate in the fourth annual Bookstore Romance Day! Click here for more details about how we'll be celebrating all weekend long here at Loyalty, and be sure to tune into the Authors to Grow With panel with authors Alisha Rai, Suzanne Park, Kosoko Jackson, Ashley Herring Blake, and Megan Bannen as they discuss the perils and payoffs of writing books for younger readers and books for adults. This panel discussion will be moderated by Loyalty's own programs and marketing manager Christine. This event will be held digitally via Crowdcast. Click here to register for the event. You can order the participating authors' books below and there will also be an option to snag the books through Loyalty during the event.

Megan Bannen is a former public librarian whose YA debut The Bird and the Blade was an Indies Introduce Summer/Fall 2018 pick, a Summer 2018 Kids’ Indie Next List pick, and a Kirkus Best YA Historical Fiction of 2018 pick. While most of her professional career has been spent behind the reference desk, she has also sold luggage, written grants, collected a few graduate degrees from various Kansas universities, and taught English at home and abroad. She lives in the Kansas City area with her husband and their two sons.

Ashley Herring Blake is an award-winning author and teacher. She is the author of six novels for young adults and middle grade readers, as well as the adult romance novel Delilah Green Doesn’t Care. She lives on a very tiny island off the coast of Georgia with her family.

Kosoko Jackson is a digital media specialist, focusing on digital storytelling, email, social and SMS marketing, and a freelance political journalist. Occasionally, his personal essays and short stories have been featured on Medium, Thought Catalog, The Advocate, and some literary magazines. When not writing YA novels that champion holistic representation of black queer youth across genres, he can be found obsessing over movies, drinking his (umpteenth) London Fog, or spending far too much time on Twitter. His YA debut, YESTERDAY IS HISTORY, will come out in 2021, published by SourceBooks Fire and his adult #OwnVoices queer Romcom, I’M SO (NOT) OVER YOU will come out in 2022, by Berkley Romance.

Suzanne Park is a Korean American writer who was born and raised in Tennessee. In her former life as a stand up comedian, Suzanne appeared on BET's "Coming to the Stage," was the winner of the Seattle Sierra Mist Comedy Competition, and was a semi-finalist in NBC's "Stand Up For Diversity" showcase in San Francisco. Suzanne graduated from Columbia University and received an MBA Degree from UCLA. She currently resides in Los Angeles with her husband, female offspring, and a sneaky rat that creeps around on her back patio. In her spare time, she procrastinates. Her novels have been featured in “best of” lists in NPR, Popsugar, Real Simple, Country Living, Bustle, Buzzfeed, Marie Claire, Parade, Shondaland and The Today Show.

Alisha Rai pens award-winning contemporary romances. Her novels have been featured on the IndieNext and the LibraryReads lists, and been named Best Books of the Year by Washington Post, NPR, New York Public Library, Amazon, Entertainment Weekly, Reader’s Digest, Kirkus, “O” the Oprah Magazine, and Cosmopolitan Magazine. When she’s not writing, Alisha is traveling or tweeting. To find out more about her books or to sign up for her newsletter, visit www.alisharai.com.

Christine Bollow is the Programs and Marketing Manager for Loyalty Bookstores and a Bookstagrammer @readingismagical. She serves on the ABA's Bookseller Advisory Committee and her book recommendations have been featured in Buzzfeed Books, Elle.com, and Book Marks. Christine is a graduate of Barnard College and currently lives in the Washington, DC area.

The Undertaking of Hart and Mercy (Paperback)

The Bird and the Blade (Paperback)

A Dash of Salt and Pepper (Paperback)

So We Meet Again: A Novel (Paperback)

Partners in Crime: A Novel (Paperback)

While You Were Dreaming (Hardcover)