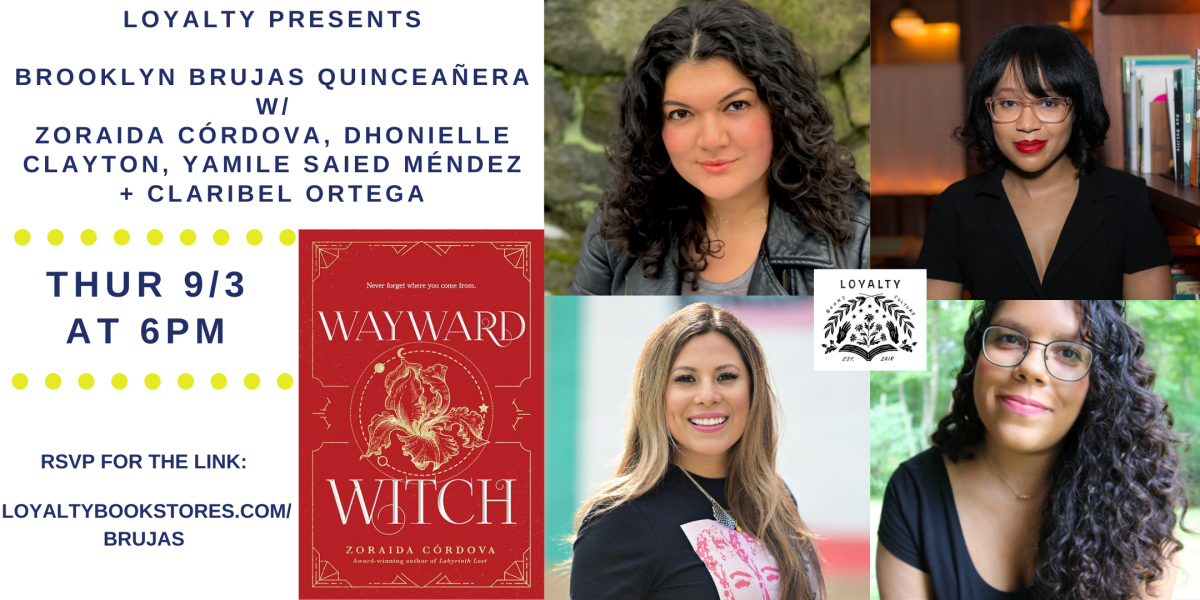 We have a fabulous panel of amazing authors to chat about Wayward Witch, the final installment in the Brooklyn Brujas series by Zoraida Córdova! Zoraida and Dhonielle Clayton, hosts of the podcast Deadline City, will be joined by fellow authors Yamile Saied Méndez and Claribel Ortega for our Brooklyn Brujas Quinceañera! This event will be held digitally via Crowdcast. This virtual event is free to RSVP, with an option to RSVP + buy the book. Simply click on the link below. There will also be an option to buy the book during the event!

Rose Mortiz has always been a fixer, but lately she’s been feeling lost. She has brand new powers that she doesn’t understand, and her family is still trying to figure out how to function in the wake of her amnesiac father’s return home. Then, on the night of her Death Day party, Rose discovers her father’s memory loss has been a lie.

As she rushes to his side, the two are ambushed and pulled through a portal to the land of Adas, a fairy realm hidden in the Caribbean Sea. There Rose is forced to work with a group of others to save Adas. Soon, she begins to discover the scope of her powers, the troubling truth about her father’s past, and the sacrifices he made to save her sisters. But if Rose wants to return home so that she can repair her broken family, she must figure out how to heal Adas first.

Zoraida Córdova is the author of the award-winning Brooklyn Brujas series and The Vicious Deep trilogy. Her short fiction has appeared in Star Wars: From a Certain Point of View, and Toil & Trouble: 15 Tales of Women and Witchcraft. She is the co-editor of Vampires Never Get Old, a YA anthology forthcoming from Imprint/Macmillan in fall 2020. Her upcoming YA novels include Star Wars: A Crash of Fate, and Incendiary, book one in the Hollow Crown duology (Disney/Hyperion 2020). Zoraida was born in Ecuador and raised in Queens, New York. When she isn’t working on her next novel, she’s planning her next adventure.

ABOUT THE IN CONVO PARTNERS

Dhonielle Clayton hails from the Washington, D.C. suburbs on the Maryland side, but now lives in New York City. She has earned an MA in Children’s Literature from Hollins University and an MFA Writing for Children at the New School. She taught secondary school for several years – at a pre-professional ballet academy and a private K-8 school. She spent most of her twenties in and out of America – living in London, Paris, a small Japanese town, Bermuda – and wandering the planet. She’s been on five out of seven continents, and has grand plans to reach all of them. She is a former elementary and middle school librarian, and co-founder of CAKE Literary, a creative kitchen whipping up decadent – and decidedly diverse – literary confections for middle grade, young adult, and women’s fiction readers. She is also COO of the non-profit We Need Diverse Books. Dhonielle is the author of New York Times bestseller The Belles and coauthor of the Tiny Pretty Things series. You can find her online at www.dhonielleclayton.com or follow her @brownbookworm.

Yamile (sha-MEE-lay) Saied Méndez is a fútbol-obsessed Argentine-American who loves meteor showers, summer, astrology, and pizza. She lives in Utah with her Puerto Rican husband and their five kids, two adorable dogs, and one majestic cat. An inaugural Walter Dean Myers Grant recipient, she’s also a graduate of Voices of Our Nations (VONA) and the Vermont College of Fine Arts MFA Writing for Children’s and Young Adult program. She’s a PB, MG, and YA author. Yamile is also part of Las Musas, the first collective of women and nonbinary Latinx MG and YA authors. She’s represented by Linda Camacho at Gallt & Zacker Literary.

Claribel A. Ortega is a former reporter who writes YA & MG fantasy inspired by her Dominican heritage. When she’s not busy turning her obsession with eighties pop culture, magic and video games into books, she’s streaming on her Twitch and Youtube gaming channel, Radbunnie or helping authors navigate publishing with her consulting business GIFGRRL. Claribel’s debut middle grade novel GHOST SQUAD is out now from Scholastic.

On These Magic Shores (Hardcover)